OTCMKTS:DYLLF) is pleased to announce completion of the second phase of the RC drilling program on the Tumas 3 deposit, located on EPL3496 (Figure 1*). The project is held by Deep Yellow through its wholly owned subsidiary Reptile Uranium Namibia (Pty) Ltd (RUN).

- Completion of the second phase of the Tumas 3 RC drilling program with 53 holes for 1,115m.

- Drilling aimed at closing off the resource around the periphery of the Tumas 3 deposit with better definition.

- All drill holes from the first phase were logged using optical borehole scanner (OPTV) technology to determine grain size distribution within the mineralisation in support of the Tumas PFS.

- The Tumas Pre-Feasibility Study (PFS) is progressing as planned, with completion expected in late November

The second phase of the drill program, which commenced in late September (refer to ASX announcement 24 September 2020), targeted the peripheral zones of the Tumas 3 deposit to more clearly define the edges of the uranium mineralisation along and across the palaeochannel to assist reserve estimation.

These positive results are reflected in Figure 2*, which outlines GT (grade x thickness) in colour code, comparing previous drilling results against most recent results. Encouragingly, the GT intervals from the second phase drill program confirm grade continuity along the periphery of the Tumas 3 deposit, with the possibility of locally extending the existing resource base in selected areas.

The mineralisation at Tumas 3 occurs as a discrete mineralised deposit, occurring separately from the other uranium deposits within this fertile palaeochannel system, namely Tumas 1 (includes Tumas 1 East) and 2 as well as Tubas Red Sands/Calcrete deposits (see Figure 1).

Only 60% of the known regional Tumas palaeochannel system has been drilled to date and significant upside potential remains to further increase the resource base that is associated with this highly prospective target, with 50km of channels remaining to be tested.

Downhole imagery in support of the current PFS was produced from all first phase drill holes (refer to ASX announcement from 24 September 2020) using OPTV technology to investigate grain size distribution in the Tumas 3 mineralisation. Data interpretation is currently underway.

The Tumas PFS is progressing as planned with completion expected late November 2020. 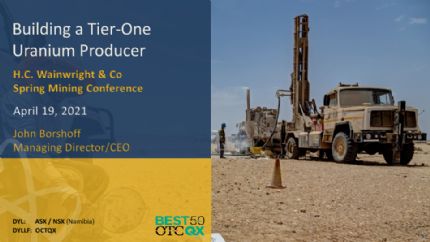