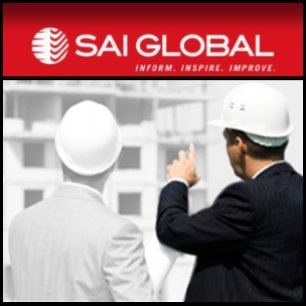 SAI Global Ltd (ASX:SAI) delivered a record result in a challenging economic environment as it could react early and decisively to the global financial crisis. Its net profit was A$26.1 million for the year to June 30 2009, up 71 per cent compared with 2008. The company said it is well placed for further growth next year.
Sydney, Aug 18, 2009 AEST (ABN Newswire) - US stocks plunged significantly overnight despite a better-than-expected US manufacturing survey data. Falls in Asia and Europe markets put heavy pressure on the US stocks. Shanghai stocks dropped 5.8% Monday.

Australia's Treasurer Wayne Swan said Tuesday that the government's fiscal stimulus has been absolutely imperative to sustaining growth in the March quarter. Swan said Reserve Bank of Australia is still forecasting below-trend growth for Australia and said to withdraw the stimulus prematurely would undermine the recovery.

The RBA will release minutes of its August monetary policy meeting. Melbourne Institute issues its wages report for the August quarter.

National Australia Bank (ASX:NAB) has agreed to buy Challenger Financial Services Ltd's (ASX:CGF) mortgage business for A$385 million. The deal will boost NAB's mortgages under administration by A$110 billion and help to increase its share of the market for home loans. NAB expects the deal to be completed by the end of calendar 2009.

Santos (ASX:STO) has sold 60 per cent of its assets in the Bonaparte Basin to French-based GDF Suez (EPA:GSZ) for up to $US370 million. The two companies plan to build a floating liquefied natural gas platform that will produce 2 million tonnes of LNG per annum.

Household products supplier GWA International Limited (ASX:GWT) said net profit for the year to June 30 rose 5.3 per cent to A$48.3 million from A$45.9 million in the previous year, in line with the company's guidance in July. GWA said there were positive signal in the housing market and that it expected some improvement in profitability the 2009/10 financial year.

OneSteel (ASX:OST) posted net profit of A$230 million for for the year to June 30 2009, down 6% from A$245 million in fiscal year 2008. OneSteel said the financial year had begun strongly, but the last three quarters were affected by the global financial crisis. The company said it would not provide earnings guidance for the current financial year due to a high level of uncertainty concerning foreign exchange rates, prices and the rate of economic recovery.

James Hardie Industries NV (ASX:JHX) booked a net loss of US$77.9 million for the quarter ended June 30, compared to a profit of US$1.4 million in the previous corresponding quarter. The fall is due to weakness in the US housing construction market and the general economy.

Marketing services provider Photon Group (ASX:PGA) launched a A$115million capital raising. The capital raising will be used to reduce debt and ensure the company can fund future earn-outs from its existing facilities. The company reported net profit after tax was down 1 per cent to A$21.4 million.

SAI Global Ltd (ASX:SAI) delivered a record result in a challenging economic environment as it could react early and decisively to the global financial crisis. Its net profit was A$26.1 million for the year to June 30 2009, up 71 per cent compared with 2008. The company said it is well placed for further growth next year.

Engineering and property services firm United Group Ltd (ASX:UGL) reported a net profit of A$142.48 million for the year ended June 30, up 8.7 per cent on the prior year. The company expects revenue for the 2010 financial year to be around A$4.5 billion and adjusted NPAT (net profit after tax) to be around A$150 million.

Advertising and media consulting company STW Communications Group Ltd (ASX:SGN) said net profit for the half year ended June 30 was $12.8 million, 8 per cent higher than $11.9 million in the same period in 2008. STW also anticipates that full year underlying net profit will achieve the average analysts' forecasts of A$33 million.

Origin Energy (ASX:ORG) says its joint coal seam gas (CSG) venture with ConocoPhillips (NYSE:COP) has secured a site in Queensland for its proposed liquefied natural gas (LNG) plant. An analysis found that an average of 10,300 jobs would be created during the 10-year construction period of the project.