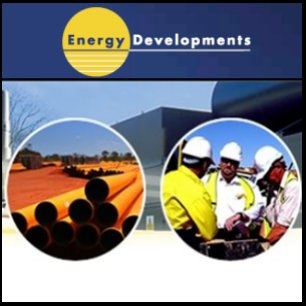 Energy Developments Ltd (ASX:ENE) has confirmed that a private equity fund has made a A$430 million bid to acquire 100 per cent of the clean power company. The unnamed firmed offered A$2.80 a share for Energy Developments in a deal which is described as non-binding, conditional and incomplete.
Sydney, Sep 9, 2009 AEST (ABN Newswire) - US stocks rose overnight as commodities prices jumped. Kraft Foods' US$16.7 billion takeover bid for Cadbury boosted the market confidence on a rebound in merger and acquisition activities, despite Kraft's offer was rejected.

The National Australia Bank business survey showed confidence index jumped a further eight points in August to plus 18 points, for a total gain of 50 points since January. Australian investor confidence also lifted three points to plus five per cent, the Investment and Financial Services Association says today. Economists warned that over-optimism will encourage the RBA to gradually lift its rate from a 49-year low of 3 per cent.

Independent researcher Access Economics said that retail sales increased 6.5 per cent between November 2008 and May 2009 due to the government's "cash splash". The researcher also forecasts that employment may not be falling much but it is not rising either and the average number of hours worked by employees is falling.

The Australian Bureau of Statistics releases housing finance data for July. ABS retail trade data for July is due today. The Westpac/Melbourne Institute Survey of Consumer Sentiment for September and Seek employment index for August will be released.

Energy Developments Ltd (ASX:ENE) has confirmed that a private equity fund has made a A$430 million bid to acquire 100 per cent of the clean power company. The unnamed firmed offered A$2.80 a share for Energy Developments in a deal which is described as non-binding, conditional and incomplete.

Shareholders of agribusiness ABB Grain (ASX:ABB) will vote today on whether to accept or reject a merger with Canadian company, Viterra (TSE:VT). The takeover was announced in July and requires approval from more than 50 per cent of voting shareholders and 75 per cent of the total combined shareholdings. The proposal has unanimous support from the ABB board.

Shares in Paladin Energy (ASX:PDN) have been placed in trading halt until markets reopen on Thursday. Paladin announced plans to place new shares with institutional investors. The placement is expected to be up for 15 per cent of Paladin's issued shares. Paladin will use the funds to advance merger and acquisition and enhance Paladin's balance sheet flexibility.

Gindalbie Metals (ASX:GBG) said it has received environmental approval for its development of the Karara iron ore project in Western Australia. The approval clears the way for on-site construction and development of the large-scale Karara Project to preceed during the fourth quarter of 2009.

Australian hearing implant company Cochlear Ltd (ASX:COH) has secured a license agreement to purchase patent rights, know-how as well as joint development activities with Otologics LLC for US$25 million. The agreement with the Colorado-based company will allow the company to use Otologics' technology with cochlear implants.

Hillgrove Resources Limited (ASX:HGO) said net profit after tax for the six months ended 31 July 2009 was A$53.97 million. The results reflect the impact of the sale of the company's share and option holdings in Eastern Star Gas Limited (ASX:ESG) for a total of nearly A$172 million cash.