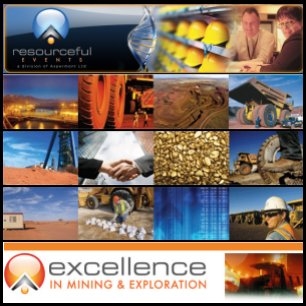 The annual National Mining Awards has grown to become a standout event on the resource sector calendar, giving the industry time to reflect on and recognise the past year's achievements.

The award categories and winners for the 2009 National Mining Awards are;

Excellence in New Technology (Sponsored by Golder Associates)
Rio Tinto (ASX:RIO) for its Remote Mining technology. Located in Pilbara it incorporates a suite of new technologies all operating in a real mining environment.

Excellence in Discovery (Sponsored by Kingsgate Consolidated Limited)
Ivanhoe Australia (ASX:IVA) for its Merlin Project in northwestern Queensland which has been identified as the world's highest-grade, combined deposit of molybdenum and rhenium.

Excellence in Corporate Transacting (Sponsored by BGF Equities)
Origin Energy (ASX:ORG) for gain of A$6.7bn resulting from the scale of a 50 percent interest in Australia Pacific LNG Project, to Conoco Phillips (NYSE:COP).

Excellence in Production (Sponsored by Apollo Global)
Dominion mining (ASX:DOM) for discovering a total of 560,283 ounces of gold from the start of production by 30 June 2009 at an average operating cost of A$357 per ounce.

Excellence in Growth (Sponsored by the Sydney Mining Club)
Extract Resources (ASX:EXT) for a market capitalisation growth of A$188m in October 2008 to an incredible A$1.8bn in July 2009.

Excellence in Operations and Mine Management (Sponsored by Outotec)
Cadia Valley Operations, the largest gold and copper producer in New South Wales and one of Australia's largest gold producers. Operations comprise the large, low grade Cadia Hill open pit mine and the higher grade Ridgeway underground mine.

Polly Hitman, General Manager of Resourceful Events, the company that organises Excellence in Mining said "the national mining awards is a fitting way to round off an event that brings resources industry and investment community together. The night has seen some very fitting awards across all areas of the industry".

The two-day program has been a resounding success with more than 75 presenters including mining companies presenting to investors and key executives discussing issues across a wide range of topics impacting the global mining industry.

Resourceful Events is the events and conference division of Aspermont Limited, Australia's leading print and Internet publisher to the mining, oil & gas and related sectors.