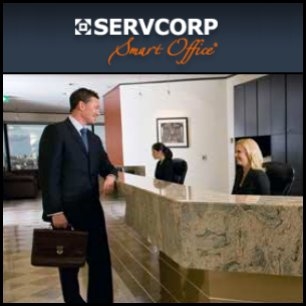 Office service firm Servcorp Limited (ASX:SRV) plans to sell new shares to institutions and retail investors to raise A$80 million to fund its growth and take advantage of depressed prices for real estate. The company will raise A$51 million from an institutional placement and A$29 million from a one-for-11 accelerated non-renounceable entitlement offer.
Sydney, Oct 12, 2009 AEST (ABN Newswire) - Dow index hit a fresh 2009 high on Friday after the earnings season kicked off. Upbeat forecasts on IT giants IBM and Intel fueled the market's growing expectations over a profit recovery. S&P's 500 and Nasdaq both gained more than 4.5 per cent for the week.

The Australian market closed slightly lower on Friday as investors remained cautious to the US corporate results. Uncertainty may continue to weigh on the local market as more major US companies are scheduled to release their earnings this week. The benchmark S&P/ASX200 index Friday dropped 15.7 points, or 0.33 per cent, to 4752.9. For the week, the ASX200 rose 3.3 per cent. The broader All Ordinaries index lost 8.8 points, or 0.18 per cent, to 4754.5 on Friday.

Australia's major banks have tipped that they will increase mortgage rates by more than the official Reserve Bank rises in the coming months because they are facing higher costs of raising money in the wholesale markets. But Treasurer Wayne Swan says the big four banks cannot justify raising interest rates by more than the Reserve Bank of Australia's 25-basis-point increase.

Today the Australian Bureau of Statistics will release lending finance data for August.

M&A News
Felix Resources (ASX:FLX) said China's Yanzhou Coal Mining (SHA:600188) today will resubmit the application for its A$3.54 billion bid for Felix to Australia's Foreign Investment Review Board (FIRB) for a second time. Yanzhou withdrew and resubmitted its application for the first time last month.

Mirvac Group (ASX:MGR) has entered into a Merger Implementation Deed with Mirvac Real Estate Investment Trust (ASX:MRZ) in relation to a A$256 million offer to acquire all the issued units in MRZ. Mirvac Group's offer is proposed to be implemented by way of a trust scheme, valuing the trust units at 54 cents. Mirvac currently owns 24.6 per cent of MRZ.

Toll road operator Transurban (ASX:TCL) has posted toll revenue of growth of A$206.9 million for the September quarter, an increase of 6.8 per cent on the prior corresponding quarter. All Australian assets reported traffic growth for the quarter. Toll revenue growth exceeded traffic growth on six out of seven roads.

Fortescue Metals Group (ASX:FMG) says its September quarter production exceeded guidance by 9 per cent and reiterated its forecasts for the December quarter. The group also plans to spend A$360 million to fast-track the development of its Christmas Creek mine, which would increase its total annual iron ore production to about 55 million metric tonnes.

Lend Lease (ASX:LLC) plans to become a stapled entity on ASX. This will be achieved by distributing units in a newly created trust, Lend Lease Trust to shareholders on a 1:1 basis and stapling each unit and share together to form a stapled security.

Office service firm Servcorp Limited (ASX:SRV) plans to sell new shares to institutions and retail investors to raise A$80 million to fund its growth and take advantage of depressed prices for real estate. The company will raise A$51 million from an institutional placement and A$29 million from a one-for-11 accelerated non-renounceable entitlement offer.

Seven Network (ASX:SEV) says its holding in James Packer's Consolidated Media Holdings (ASX:CMJ) has risen to 20.96 per cent after an on-market share buyback by ConsMedia reduced the number of shares on issue.

Meridian Minerals Limtied (ASX:MII) said the FIRB has approved the investment of A$10.5 million into Meridian by Chinese company Northwest Mining and Geology Group Co. Ltd for Nonferrous Metals (NWME). NWME will subscribe to Meridian shares in a placement at a share price of A$0.08.