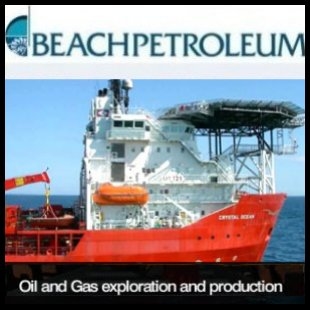 Production testing of NS377-3 (Beach 20%) Kareem Formation reservoir to provide data about fluid and reservoir properties has been completed. Flow rates during the test period were constrained to about 1,400 barrels of oil per day. Full production from the well is expected to commence during the second quarter of 2010, at initial rates in excess of 1,500 barrels of oil per day, as predicted earlier.

The NAFTA Rig-1 is being moved four kilometres southeast of the NS377-3 production well to test the oil potential of the Kareem Formation at the NS377-4 (Teen) location (Beach 20%). Teen, expected to spud on 1 December, is a near-shore exploration opportunity in the Gulf of Suez that, like the NS377-3 well, is to be drilled from an onshore location. Although located nearby and having a similar well name, the well will be evaluating a different structure to that which hosts the NS377-3 oil accumulation.

Logging information for Paralana-2 geothermal deep injector well (Beach, well Operator, earning 21%) has been acquired to 3,740m and is currently being evaluated. Operations are currently delayed by significant rain in the basin.