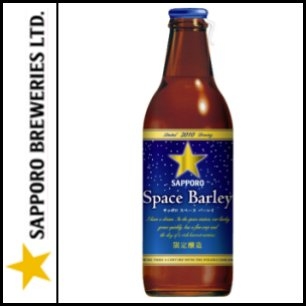 "SAPPORO Space Barley," Beer Made From "Space Barley," Is Launched Onto The Market, For The First Time In The World In Limited Quantities For Charity
Tokyo, Dec 3, 2009 AEST (ABN Newswire) - Sapporo Breweries Ltd. (TYO:2501)(Head Office: Tokyo; President Masaru Fukunaga) is launching sales of the world's first beer produced using malt made 100% from "space barley," the progenies of spaceflight barley seeds, This limited offer is exclusive to the Internet and proceeds will go to charity. Applications to purchase the beer, which is dubbed "SAPPORO Space Barley," can be made from December 3 (Thu), 2009 on the dedicated web page set up on our company's website. Two hundred and fifty successful customers will be selected from among the applicants by lottery.

The "space barley" used to make this beer is the fourth generation descendant of the Haruna Nijo malting barley that was developed by Sapporo Breweries and kept in space for five months during 2006 as part of our collaborative research with the Russian Academy of Sciences and Okayama University with the purpose of achieving self-sufficiency in food in the space environment. Since Sapporo Breweries was founded, we have continued to create excellent varieties for raw materials, and we are the only company in the world that operates breeding/research organizations for both barley and hops. This, the world's first sale of this "space beer," is the result of our extended nurturing/development of the required technologies.

We have hosted a range of promotional events that capitalize on "space barley" since 2008 in an effort to foster children's interest in space and science. We also want SAPPORO Space Barley to contribute to the promotion of science education for children and the development of space science research in Japan and Russia by donating all of the proceeds to Okayama University.

It is our hope that our customers will feel able to sit back, relax, and enjoy SAPPORO Space Barley, letting their minds drift through the infinities of space and into dreams of the future.

3. Featured contents:
Beer brewed using malt made 100% from "space barley" (fourth generation) Roasted malt was used to bring out a slightly dark color that evokes an image of cosmic space.

The beer features a mellow fragrance with a distinctive taste of roasted barley.

4. Volume/number of bottles:
330 ml in a one-way bottle; Bottles are packed in a special box (one box contains six bottles).

5. Package design:
Stars studded against a gradated dark navy background representing cosmic space, with a large star, our corporate symbol, placed at the center. The product name is displayed in the shape of a shooting star, exuding refined taste.

6. Quantity:
Limited to 250 boxes (Purchase limited to one box per person)

7. Price:
10,000 yen per box (including shipping and tax)
* This beer will be sold for charity, to contribute to the promotion of science education for children and the development of space science research in Japan and Russia, through donation of all proceeds to Okayama University.

8. How to request purchase:
Applications for the lottery to buy the beer are accepted on the dedicated web page set up on our company's website.

Purchase will be limited to applicants living in Japan and aged 20 or older.

April 2006
Haruna Nijo malting barley developed by Sapporo Breweries through collaborative research with Okayama University and the Russian Academy of Sciences was kept aboard the Zvezda Service Module, a component of the International Space Station (ISS), for five months (first-generation "space barley").

May 2008
Harvested the third-generation "space barley".

October 2008
Trial brewing of the world's first beer made from the third-generation "space barley".

January 2009
Tasting events held at breweries nationwide for beer made from the third-generation "space barley".

May 2009
Harvested the fourth-generation "space barley".

Founded in 1876, Sapporo Breweries, Ltd. has always been known for its focus on the finest ingredients, and its insistence on delivering quality products while continuing to delight its customers with new and exciting possibilities. After 130 years of dedicated focus on the ingredients, our commitment bore fruit in 2006, when our wheat and hops were now cultivated solely by exclusively contracted producers. In our beer division, this focus on great taste, and on product quality and safety, is the foundation on which we will continue to grow the value of our Sapporo and Yebisu brands. With the development of completely new products such as Draft One, we maintain our tradition of being the pioneer in the industry, constantly offering our customers value and taste.

SAPPORO HOLDINGS LIMITED (TYO:2501) is a Japan-based holding company that is active in four business segments. The Alcohol segment is engaged in the manufacture and sale of beer, sparkling liquor, domestic wine, brandy, distilled spirit and other alcoholic beverages. The Beverage segment manufactures and sells beverages, and sells drinking water through vending machines.