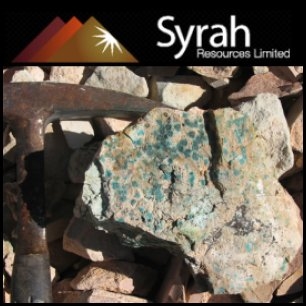 Syrah Resources (ASX:SYR) has signed a Heads of Agreement to form an exploration and mining joint venture with Mashoura Co, Saudi Arabia. The Syrah and Mashoura joint venture will continue to grow a mineral prospect portfolio in Saudi Arabia on an ownership basis of 80 per cent Syrah and 20 per cent Mashoura.
Sydney, Dec 7, 2009 AEST (ABN Newswire) - Australian market Monday ended lower in a thin trade led by resources stocks, as commodities prices dropped on a sharp rise in US dollar. At the close, the benchmark S&P/ASX200 index fell 25.7 points, or 0.6 per cent, at 4676.5, while the broader All Ordinaries lost 26 points, or 0.6 per cent, to 4695.2.

The Australian Industry Group/Housing Industry Association Performance of Construction Index (PCI) fell 3.3 points to 47.6 points in November, below the 50-point level separating expansion and contraction. The decline was driven by a significant fall in apartment building and a further decline in engineering construction. The AiGroup's director of public policy, Dr Peter Burn, says further falls are expected over the next few months as the First Home Owners Boost expires totally on December 31.

ANZ job survey showed that the number of jobs advertised in major newspapers and websites rose 5.2 per cent in November from October, seasonally-adjusted. The report also showed total job ads were 12.3 per cent higher from the recent low in July, although still down 34.2 per cent from November 2008. ANZ acting chief economist Warren Hogan said the unemployment rate appears to have stabilized.

Today NAB is scheduled to release its business survey of November. Australian Bureau of Statistics releases balance of payments and international investment data for September quarter. Dun and Bradstreet will unveil its business expectations survey.

ANZ Banking Group (ASX:ANZ) announced two further milestones in the growth of its business in Vietnam with the completion of its acquisition of The Royal Bank of Scotland Group (NYSE:RBS) business and the opening of its tenth branch in Vietnam in Ho Chi Minh City. ANZ now have completed the acquisition in the Philippines and Vietnam, two of the six markets to transition to ANZ ownership. The bank expects to complete the next acquisition in Hong Kong before the end of March 2010 and the remaining markets by mid-2010.

Origin Energy Ltd (ASX:ORG) was unable to take the full stake from Woodside Energy Ltd for A$712.5 million because another joint venture partner, Benaris International Pty Ltd, decided to exercise its pre-emption right in relation to some of its interests in the project. Origin plans to take a smaller stake for A$507.2 million instead.

Babcock & Brown Power (ASX:BBP) reached an agreement to settle a A$444 million debt with Babcock & Brown International. BBP will pay up to A$37.7 million in cash and proceeds from the planned sale of BBP's 50 per cent stake in the Oakey power station in Queensland. BBP will also issue 80.73 million shares to its former parent.

PaperLinx (ASX:PPX) will close its Wesley Vale operation and part of the operations at Burnie, after a 10-month review of the businesses. PaperlinX will shed 252 jobs following the planned closure of most of its Tasmanian manufacturing plants. PaperlinX said it will become solely a merchanting company, with businesses distributing paper, sign and display and graphics materials and industrial packaging to a wide range of customers in Australia, New Zealand and Asia, Europe and North America.

Rio Tinto (ASX:RIO) said yesterday it will be focusing the majority of its investment in carbon capture and storage technology on the Hydrogen Energy California project with energy giant BP (NYSE:BP). On the other hand, Rio Tinto sold its 50 per cent stake in a hydrogen power project in Abu Dhabi to BP for an undisclosed sum.