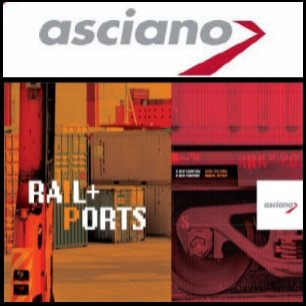 Rail operator Asciano Group (ASX:AIO) has signed a 10-year coal haulage contract with Isaac Plains Coal Management, a Queensland joint venture between Aquila Resources (ASX:AQA) and Brazilian iron ore giant Vale (NYSE:VALE). Isaac, Asciano's fifth Queensland coal haulage customer, will have access to capacity of 1.1 million tonnes per year from the Isaac Plains mine in the Goonyella system to Dalrymple Bay coal terminal near Mackay.
Sydney, Dec 9, 2009 AEST (ABN Newswire) - The Australian sharemarket closed marginally lower in light trading yesterday as banks were down on concerns that bad debts could increase after interest rate rise. The benchmark S&P/ASX 200 index gave up 5.9 points, or 0.13 per cent, at 4670.60, while the broader All Ordinaries lost 0.19 per cent to 4686.40 points.

Australian Bureau of Statistics (ABS) data showed that exports of goods and services fell by 2.3 per cent in seasonally adjusted, while imports were up by 5.8 per cent in September quarter. The balance of payments for the September quarter showed a widening in the current account deficit to a seasonally-adjusted $16.18 billion from a revised $13.13 billion in the previous quarter.

National Australia Bank survey showed that the Australian business confidence index rose 3 points to a seven-year high of 19 in November. The confidence of firms in the mining, retail and transport sectors rose in November, while the construction and wholesaling industries weakened.

The results of the Australian Business Economists (ABE) annual forecasting survey forecast the cash rate to reach 4.75 per cent in 2010. The ABE committee expects 5.5 per cent would be the peak for the cash rate in the current cycle.

AWB Limited (ASX:AWB) has sold Landmark Financial Services' A$2.4 billion loan book and A$300 million debenture book to ANZ (ASX:ANZ) for an undisclosed sum. In conjunction with the sale of assets, Landmark has entered into an exclusive relationship with ANZ for Landmark to refer any customers who may be interested in acquiring financial services products to ANZ. Landmark is a division of AWB's rural service business. The transaction reduce A$2.1 billion in debt from AWB's balance sheet.

Warrnambool Cheese & Butter Factory Co. (ASX:WCB) Tuesday said it has received a confidential unsolicited and indicative proposal from an unnamed party that has expressed an interest in the possible acquisition of WCB. The value of the offer from the unidentified party wasn't disclosed. The board has informed the third party that the proposal doesn't incorporate appropriate value to reflect the strong prospects of the company. The board has recommended shareholders take no action on the matter.

Felix Resources (ASX:FLX) said its shareholders have approved the Scheme of Arrangement by which Yanzhou Coal Mining Company (SHA:600188)(HKG:1171) will acquire all of the issued shares of Felix. The company expects to apply to the Court for an order to approve the Scheme within the next few days.

Exxon Mobil Corp. (NYSE:XOM) and its partners Tuesday agreed to proceed with construction of a US$15 billion liquefied natural gas project in Papua New Guinea, pending completion of sale and purchase agreements with LNG buyers and finalisation of financing arrangements with lenders. Australian listed companies Oil Search Ltd (ASX:OSH) and Santos Ltd (ASX:STO) hold more than 40 per cent equity in the venture.