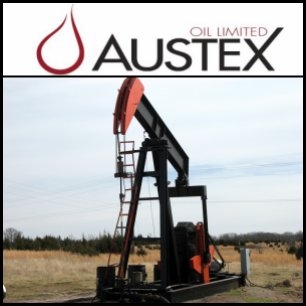 AusTex Oil Limited (ASX:AOK) said that drilling of the Mayo Moore #5 well has commenced on the Lancaster Lease Group, Tulsa County, Oklahoma. The well is a step-out development well to the southeast of the recently successful Mayo Moore #4. Drilling of the well is expected to be completed in three to four days.
Sydney, Dec 14, 2009 AEST (ABN Newswire) - The Australian sharemarket ended the four consecutive day losing streak and closed higher on Friday in quiet trading condition. The market opened stronger on the good lead from Wall Street and made sustained gains, helped by the Chinese industrial production data suggesting demand for Australian resources will remain strong. At the close, the benchmark S&P/ASX 200 index rose 28.5 points, or 0.62 per cent, to 4635.20 points, while the broader All Ordinaries index also advanced 28.5 at 4651.40 points. For the week, the market closed down 1.4 percent.

This week the Reserve Bank of Australia will release its Monetary Policy Meeting Minutes. Australian Bureau of Statistics is to release housing start data and Gross Domestic Product figures, both of September quarter.

Mitsui & Co. (TYO:8031) has obtained the rights to participate in two uranium exploration projects Down Under from Australian firm Uranium Equities Ltd (ASX:UEQ), reported a Japanese media. Mitsui paid some 200 million yen to reserve the right to buy stakes in the Nabarlek and West Arnhem mining zones in northern Australia. It will now receive and analyse data relating to the projects from Uranium Equities.

Fortescue Metals Group (ASX:FMG) said the resource estimate at its proposed A$3.6 billion Solomon development in the Pilbara region was now 300 million tonnes, up from 125 million tonnes previously. Fortescue said that resources at the Firetail deposit boosted overall Solomon resources to 2.4 billion tons.

Rio Tinto (ASX:RIO) has appointed a new chief negotiator for the company's 2010 Asian iron ore pricing negotiation in response to "increased complexities" in the Asian market. Will Malaney will hand over his responsibility to Danny Goeman, Rio Tinto Iron Ore Asia's general manager of marketing. Mr Goeman will relocate to Singapore in January to lead the iron ore price negotiation team. China also recently announced the largest steel producer of China, Baosteel, will take the place of China Iron and Steel Association as chief negotiator for iron ore prices.

Boom Logistics (ASX:BOL), a provider of cranage and related industrial services, has entered into a contract with the TDK joint venture to supply cranes and associated resources and services for the Barrow Island construction village for the Gorgon project. The contract value is A$4 million over 15 months with a twelve month option to extend. TDK is a joint venture between construction and engineering industry majors Thiess, Decmil Group Ltd (ASX:DCG) and Kentz Group (LON:KENZ). Boom also has been awarded a major new contract with Newmont (ASX:NEM) at the Boddington Gold operations in Western Australia.

AusTex Oil Limited (ASX:AOK) said that drilling of the Mayo Moore #5 well has commenced on the Lancaster Lease Group, Tulsa County, Oklahoma. The well is a step-out development well to the southeast of the recently successful Mayo Moore #4. Drilling of the well is expected to be completed in three to four days.