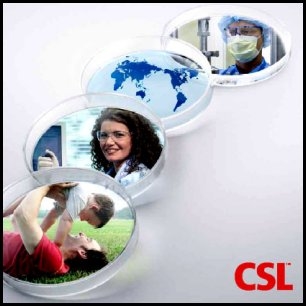 CSL Ltd. (ASX:CSL) beat the market expectations with a 23 per cent rise in first half profit in the face of significant currency headwinds. CSL recorded a net profit of A$617.4 million in the six months ended Dec. 31, up from A$501.9 million in the corresponding period last year.
Sydney, Feb 18, 2010 AEST (ABN Newswire) - Australian shares posted a strong gain on Wednesday while Wall Street and Asian markets picked up on a brightened outlook and higher commodities prices. The local market was also lifted by a bunch of upbeat profit results. At the close, the benchmark S&P/ASX200 index surged 100.1 points, or 2.2 per cent, at 4667.9, while the broader All Ordinaries index jumped 96 points, or 2.1 per cent, to 4686.8.

The annualised growth rate of the Westpac-Melbourne Institute Leading Index, which is designed to predict the direction of the economy, was 6.2 per cent in December, much higher than its long term trend rate of 2.7 per cent. Matthew Hassan, senior economist at Westpac, says the index continues to point to a dramatic improvement in growth prospects after hitting an extreme low of negative 6.9 per cent in May.

ASX:TCL) said it plans to make a bid for the Lane Cove Tunnel in Sydney, whose operator has gone into receivership last month. Transurban also indicated that it has had no contact from two Canadian pension funds since it rejected their takeover offer. The group reported net profit for the six months ended Dec. 31 rose to A$50.4 million from A$1.9 million in the previous corresponding period.

ASX:CCL) said full-year earnings in 2009 rose 16.4 per cent to A$449 million, up from A$385.6 million a year earlier. The result was due to strong performances by the Indonesia & PNG and Australian Beverage businesses, the recovery in the second half by the New Zealand business and the earnings growth of more than 20 per cent by the Food & Services Division. The group expects to deliver high single-digit earnings growth for the first half of the new fiscal year.

ASX:COU) said net profit rose to A$13.8 million for the six months to December 31 from A$5.86 million in the prior corresponding period, benefitted from a A$5.45 million gain in its investment portfolio. Count still expects to grow full year EBIT by 10 per cent, which would take it to about A$25.8 million.

ASX:AXA) posted a net profit of A$679.2 million for the 12 months to December 31 compared with a loss of A$278.7 million a year earlier. The recovery was partly due to a turnaround in investment earnings after financial markets recovered.

ASX:DXS) booked a net loss of A$107.03 million in the six months ended December 31, compared with a A$975.15 million net loss for the first half of last year. CEO Mr Victor Hoog Antink said the half-year results reflect the resilience and inherent value of our quality property portfolio, despite difficult operating conditions in 2009.

ASX:CSL) beat the market expectations with a 23 per cent rise in first half profit in the face of significant currency headwinds. CSL recorded a net profit of A$617.4 million in the six months ended Dec. 31, up from A$501.9 million in the corresponding period last year. CSL now expects its full year result to be at the upper end of previous guidance for a net profit of between A$1.16 billion and A$1.26 billion at average fiscal 2009 exchange rates.

ASX:WDC) said Wednesday its operational earnings rose 6.2% in 2009 as performance from the Australian business was strong throughout the year and conditions have stabilised in the second half of the year in our United States, United Kingdom and New Zealand businesses.

ASX:ANN) reported that net profit for the six months to Dec. 31 fell to A$61.4 million from A$72.2 million the previous year. The company has raised its full year earnings guidance after a strong rebound in first half sales, now expecting full year earnings per share of 69-74 U.S. cents a share.