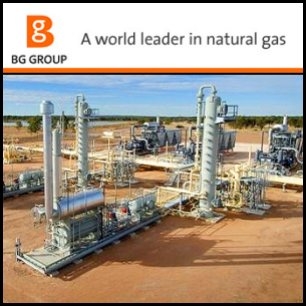 HKG:0883), plan to sign a sale-and-purchase agreement for liquefied natural gas from Australia Wednesday, said sources. The deal could be worth as much as A$80 billion. As part of the deal, the Chinese group will buy a 10% stake in one of the two LNG trains that BG plans to construct at the project. CNOOC will also take a 5% stake in certain BG coal seam gas fields.

TYO:6502) said it will begin construction of an additional flash memory manufacturing facility at its plant in central Japan in July, after putting the plan on hold due to the global financial crisis. Toshiba said it saw demand begins to recover with the market penetration of smartphones and other new applications, and foreseeing further market expansion in the medium- and long-term. The company now recognizes that the time is right to construct a new fabrication facility. Yesterday Toshiba shares also strongly gained on the news that the company will jointly develop a next generation nuclear reactor with TerraPower, which is controlled by Microsoft Chairman Bill Gates.

HKG:3988) said the Chinese lender and Singapore's sovereign-wealth fund Temasek Holdings plan to set up a rural banking joint venture in China. The joint venture will provide loans to China's rural population. Bank of China Tuesday posted a bigger-than expected 26% rise in 2009 net profit due to a surge in loans amid China's stimulus-led economic rebound, but the bank is expected to slow down the pace of lending this year.

A unit of Singapore based Keppel Corp (SIN:BN4) has won a 62 million euro contract to build a floating platform that will be used to erect a wind farm off the German coast. Keppel's Dutch unit will partner with the German unit of French energy company Areva (

EPA:CEI) to build the Mobile Offshore Application Barge, with completion scheduled for the fourth quarter of 2011.