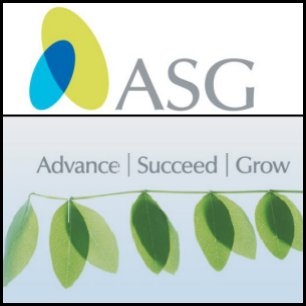 IT services provider ASG Group (ASX:ASZ) enters the SAP market for the first time through the acquisition of Courtland Business Solutions.
Sydney, April 29, 2010 AEST (ABN Newswire) - Today Australian shares continued their losing streak in early trade, despite a positive lead from Wall Street. Yesterday the Asian and Australian market declined massively on the back to credit ratings downgrades for Greece and Portugal. Australian market's decline today was led by financial shares.

US stocks rose on Wednesday on hope of a European Union bailout for Greece and an extended period that US interest rates remain at historic lows.

ASX:ASZ) enters the SAP market for the first time through the acquisition of Courtland Business Solutions, an SAP partner providing business management software to mining, oil and gas, engineering, construction and infrastructure sectors. The total purchase price is based on a multiple of five times earnings before interest and tax. ASG expects the Courtland takeover, in the form of 50 per cent script and 50 per cent cash payable in three instalments, will be earnings per share accretive in its fiscal year 2011.

ASX:ANZ) today reported a net profit for the half year ended March 31 of A$1.9 billion, up 26 per cent on the preceding half and 36 per cent higher than the prior same period a year earlier. The result was driven by an 8 per cent growth in profit before provisions excluding global markets and a 32 per cent reduction in the credit impairment charge, ANZ said. The lender anticipates over 3 per cent growth in Australia and an almost 2 per cent growth in New Zealand in 2010, while Asia will remain the world's best performing region with an annual growth of almost 8 per cent.

ASX:MGR) said today that it has entered into an agreement with Westpac Funds Management Limited, the responsible entity of the Westpac Office Trust (

ASX:WOT), to acquire all WOT units and instalment receipts. The cash and script takeover offer made by Mirvac values the property trust at about A$413 million. The proposed acquisition is expected to deliver 3 per cent earnings accretion to Mirvac Property Trust in the fiscal year ending 2011 and to expand Mirvac's Australian investment grade property portfolio by an additional A$1.1 billion. WOT has indicated that it recommended the offer from Mirvac.

ASX:AGO) will raise up to A$63.5 million through a placement to international and domestic institutional shareholders, in a bid to fund a substantial increase in production and shipments in the second half of this calendar year. Takeover target Aurox Resources Ltd (

ASX:AXO) says it believes the Atlas capital raising is a positive development for the proposed merger between Aurox and Atlas. The board of Aurox says it continues to unanimously recommend friendly takeover offer by Atlas, in the absence of a superior proposal.