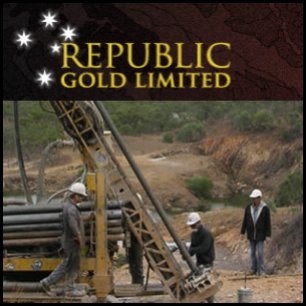 ASX:RAU) today announce that the Company will embark upon a resource enhancement phase of drilling at the Amayapampa Gold Project ("Amayapampa" or "Project"). This drilling will seek to both optimise the current mineral resource and explore possible extensions to the orebody with the primary aim of increasing the recently reported ore reserve.

In excess of 12,000 metres of drilling is planned with discussions currently underway to secure an appropriately qualified and experienced local drilling company for the campaign. The drilling campaign will be phased and carried out with two rigs. One will focus on geotechnical drilling for foundations, pit stability optimisation and further metallurgical testing; while the second rig will focus on mineral resource development. The drilling rigs sought will have dual purpose diamond core ("DD") and reverse circulation ("RC") capability to ensure the programme is completed before the commencement of ore mining at Amayapampa.

"The recently completed feasibility study found that the Amayapampa Gold Project is a very robust project, and highlighted what the Company needs to do to turn this into Bolivia's largest producing gold mine. With the announcement of the recent A$6 million underwritten capital raising and the determination of the financing strategy we are now able to allocate the necessary resources to optimise and seek to expand the current mineral resource and ore reserve bases. The prospectivity at Amayapampa gives us confidence that both will be achieved"

A small programme of in-pit geotechnical drilling will take place, along with extensions of exploration drillholes.

The open pit is planned to be mined in two phases, so that this drilling, along with geotechnical measurement from the mining of the Phase 1 pit, will allow for final pit slope angles to be optimised. The pit slope angles used in the feasibility study design are based on limited information which has led to a very conservative slope angle being applied. A re-evaluation of this is likely to see steeper angles being used which would result in fewer waste tonnes needing to be mined.

Drill pad preparation has commenced to drill 16 vertical holes along the core of the Amayapampa deposit.

These will be used to collect detailed information on the transitional ore which will include collecting sufficient sample for metallurgical testing. To-date, the metallurgical response of the transition ore has been modelled as being between oxide and primary. The testwork will confirm this modelling. A programme of diamond core re-logging has also commenced to refine the modelling of the transitional profile to ensure volumes of this material are as currently predicted. The vertical drilling will also provide valuable assay data in areas where limited data are currently present; it is likely that better grades exist in these areas than have been modelled.

Three highly prospective areas have been identified to explore for additional resource ounces with the aim of significantly expanding the existing reported ore reserves: -

1.) Conversion of inferred resources that lie within the current pit design to the indicated resource category. A successful outcome would result in an immediate conversion of those ounces to ore reserves and an increase in the mine life from the existing 7 years. A total of 2,690 metres of RC and DD drilling has been planned for this target.

2.) Exploring the highly prospective area immediately north of the open pit. Existing drilling and recent surface trenching suggest that a near surface mineral resource could be quickly established and with minor modifications to the current pit design, this could be encompassed into the ore reserve. A total of 4,610 metres of RC and DD drilling has been planned for this target zone.

3.) Exploring the zone below the open pit design for additional resource conversion to ore reserve. In some areas the pit has been optimised to a confidence base rather than an economic base, i.e. the design is bottoming out in zones with inferred resources only that cannot be converted to ore reserve.

By converting these inferred resources to at least the indicated resource category, this will allow the pit to "find" its natural economic base. This will likely add ore reserve ounces and will allow for preliminary investigations of potential underground mineable resources. A total of 2,990 metres of RC and DD drilling has been planned for this target zone.

In addition to optimising the Amayapampa mineral resource, 11 short drillholes have been planned to investigate two nearby prospects - see Figure 1 below. This will be the first drilling outside of the main mineralised zone at Amayapampa by any company.

In the area immediately to the south-west of the Amayapampa pit, the Company's geologists have recently re-activated old adits that have historically exploited high grade antimony/gold veins. Following underground and surface sampling and mapping, six drillholes will target this vein system.

Further to the north and along strike of the open pit at Amayapampa, five holes have been planned for the Luko Tin Prospect where old adits have also been recently re-activated. Given the very close proximity of both of these areas to the planned Amayapampa process plant, they may provide viable and valuable sources of plant feed, extending the life of the project.

The prices of both antimony and tin metal have risen significantly in the past 12 months. Tin is up by nearly 150% and antimony is up by approximately 170%. The immediate area surrounding Amayapampa has a significant number of historic workings of gold, tin, antimony and other metals.

For the complete Republic Gold announcement including figures, please view the following link:

Republic Gold Limited is an explorer of gold, focusing on gold deposits in Australia's slate belt gold provinces. Its two projects in the Hodgkinson Basin are the Northcote Project (75%-owned) and the Tregoora Project (100%-owned). Drilling programs have been carried out by the Company on both projects. Republic has a coverage of exploration tenements and applications in the Hodgkinson Basin totaling approximately 5,000 square kilometers.