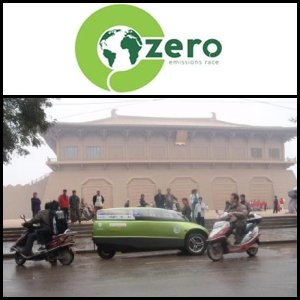 Trev Arrived In Shanghai
Shanghai, Oct 5, 2010 AEST (ABN Newswire) - The two seat renewable energy vehicle (T.R.E.V.) Trev has arrived in Shanghai, and has therefore completed the first of the three major legs of Zero Race. The team has now driven about 16,000km on the journey since departing Geneva on August 16th.
One of the other entrants in the Zero Emissions Race, ZeroTracer, has consistently been the fastest and most reliable competitor so far, being a high performance, highly refined production vehicle. Trev, on the other hand, is a prototype built by keen amateurs, and is designed for urban commuting rather than circumnavigations, so the team is thrilled at how Trev is performing. Team Vectrix is also doing a fabulous job, overcoming electrical issues to remain in the race.

Motorcycles aren't allowed on the Chinese motorways, so ZeroTracer and Team Vectrix have often been forced onto the secondary roads. Trev has been able to remain on the motorways though because it is a car instead of motorcycle, despite the rules banning three wheeled vehicles. Trev looks like a normal car from the front, so by the time tollbooth operators realise that Trev has only three wheels, we've already driven off.

Congratulations to all Zero Race participants and organisers in making it to Shanghai safely and on schedule. The next leg of the journey is across North America to Cancun in Mexico, in time for the UN Climate Change Conference in late November.

Trev, ZeroTracer, Team Vectrix and the Zero Race support vehicle have been loaded into a shipping container, and will shortly be loaded onto a ship bound for Vancouver. Zero Race recommences in Vancouver on November the 5th.