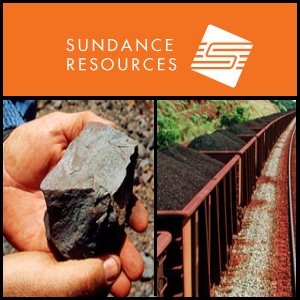 SHA:600030), to assist in securing both debt and equity funding in China for its Mbalam Iron Ore Project in West Africa and associated infrastructure. As part of its mandate, CITIC Securities will take up discussions currently underway between Sundance and several Chinese investment groups which have expressed strong interest in the Mbalam Project.

ASX:ORE) has commenced an initial drilling program at its Salinas Grandes Lithium-Potash Project in North West Argentina. Previous pit sampling shows very high Lithium and Potassium grades covering an area of approximately 60 km2, with lithium concentrations over 2000 mg/l, reaching a maximum of 3117 mg/l. The 1,200m drilling program will assess the sub-surface geology and hydrogeology with the objective of estimating an inferred resource in the first quarter of the calendar year 2011.

ASX:BDR) has received new drill results from Urucum, the largest of the known deposits at the Tucano Gold Project in Brazil. Broad zones of high grade gold mineralisation of 73.9 m @ 3.9 g/t gold including 14 m @ 12.9 g/t gold were intersected, highlighting the project's growing potential. Over the next few weeks drilling activities will escalate further with an additional 4 drill rigs mobilising to site to target gold mineralisation.