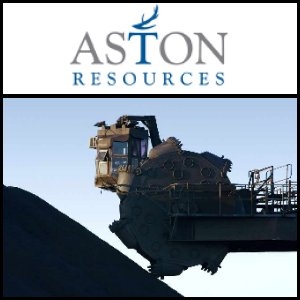 ASX:AZT) signed an Asset Sale and Purchase Agreement for the sale of a 15% stake in the Maules Creek Project for A$345 million to a wholly owned subsidiary of ITOCHU Corporation (

TYO:8001). Subject to regulatory approvals, the transaction will see Aston Resources and ITOCHU form the Maules Creek Coal Joint Venture. Aston Resources will be the Manager of the Joint Venture, whilst ITOCHU will be appointed exclusive marketing agent for Maules Creek coal sold into Japan and have the option to purchase up to 15% of coal produced from the Joint Venture on an annual basis. Maules Creek is located in New South Wales With 356mt JORC Reserves, capable of supporting a large-scale open-cut mining operation for more than 30 years. It is one of the largest coal deposits in Australia.

ASX:GMR) has received positive assays from the Falun Project in Sweden, indicating a continuation of strong gold mineralisation at depth. The new assays returned high grade results with gold up to 43 g/t, copper up to 2.24%, bismuth up to 2.4%, and selenium up to 0.425%. The company is currently working on the first resource estimate for the Eastern Copper Gold Zone at Falun.

ASX:UNX) announced a high grade primary uranium discovery at the Likuyu North Prospect, part of its 100% owned Mkuju Project, in southern Tanzania. Core samples returned a peak intersection of 10m at 1,038 ppm U3O8 at a depth of 75m. Current drilling will be completed in mid-December and further drilling programs are planned for February 2011.