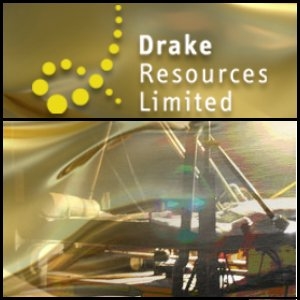 ASX:DRK) today announced a placement of A$2.18 million to a number of Australian and HK institutions as well as high net worth individuals. The money raised will allow the company to execute its drill programmes in the world class Bergslagen copper-zinc district in Sweden and, importantly, explore the expanded land position in Mauritania, West Africa. The project in Mauritania is adjacent to the giant 12 million ounce Tasiast gold mine.

ASX:DML) announced results for the second set of drill holes from the infill drilling program at Zeta Deposit. The Zeta deposit is a part of the 100% owned Boseto copper project which is being developed to commence copper production in early 2012. Planned production is 36,000 tonnes of copper and 1 million ounces of silver per annum over a minimum 15 year mine life.

ASX:PMQ) has signed a farm-in agreement with Drummond Gold Limited (

ASX:DGO), whereby Drummond can earn up to 75% of the Mount Cannindah copper-gold project by spending A$6.75 million over a period of 4 years and 9 months. The project includes approximately 6km2 of granted mining leases and two surrounding EPMs. Under the Agreement, Drummond is required to spend a minimum of A$750,000 in the first 9 months, which must include 3,000m of drilling around the Mount Cannindah Mine resource area.

ASX:MKE) successfully closed a placement to institutional and sophisticated investors in both Australia and North America for A$4.5M. The funds raised will be used to accelerate the analysis of the Alberta Light Oil Resource Play along with further land acquisitions. It will also be used to pursue the dual listing of the Company on the TSX-V in the first half of 2011 and further develop the Company's existing assets at Provost.