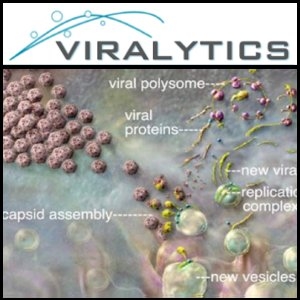 ASX:VLA) received a patent granting notice from China regarding the use of EVATAK(TM) as an anti-cancer agent in human ovarian cancer. The Company also has a Phase II Investigational New Drug application for late stage melanoma patients under discussion with the US Food and Drug Administration using its lead oncolytic virus, CAVATAK(TM). Two Phase I safety trials in Australia, studying the safety of both intratumoural and intravenous delivery of CAVATAK(TM) are currently underway.

ASX:PEK) reported the remaining assay results from the November-December 2010 RC and diamond drilling campaign in the central hills area at Ngualla. The Southern Rare Earth Zone has been further extended reporting results including 8m at 5.18% REO, 30.69m at 4.51% REO and 19m at 4.98% REO. Assay results from the northern niobium-tantalum zone have returned the highest grades of niobium, tantalum and phosphate encountered to date.

ASX:FCR) has commenced a programme of reverse circulation and diamond core drilling at the Moonlight Iron Ore Project in South Africa. The drilling will provide additional geological understanding in important areas of the deposit and provide bulk sample for the first stage of an ongoing metallurgical testwork programme. Moonlight contains a JORC compliant resource of 74Mt in the Indicated Resource category and 225Mt in the Inferred Resource category. The Company anticipates an upgraded resource statement in Q2 2011.

ASX:UUL) is pleased to announce that the No.1 Institute of Geology and Minerals of Shandong Province ("SDGM") has received formal approval from the Foreign Investment Review Board (FIRB) to subscribe for 5,600,000 shares in the Company at an issue price of 21 cents per share for total consideration of A$1,176,000. FIRB has also provided formal approval for SDGM to acquire up to 51% of the issued capital of the Company and up to a 50% interest in six tenements. United Uranium will work with SDGM to further advance these tenements in the Northern Territory.

ASX:GBG) announced today that the maiden shipment of iron ore from the Karara Iron Ore Project in Western Australia will occur within two months, following the signing of a hematite ore sales agreement with Sinosteel Midwest Corporation. The agreement, for a total of 480,000 tonnes of high-grade direct shipping ore mined at Karara, marks the effective transition of the Project to production well ahead of the completion of project construction later this year.