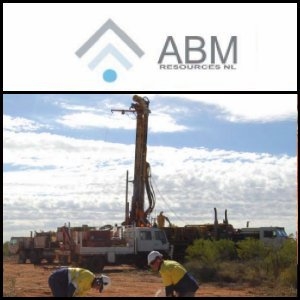 ASX:ABU) is pleased to announce that, following the extended wet-season in the Northern Territory, drilling has commenced at the Buccaneer Western Zone over Easter.

- Higher grade Western Zone Target volume is 300-600m long by 50-100m wide by 400m down-dip (from near surface) and has potential to add significantly to ABM's 1.67million ounce gold resource at Buccaneer.

Other work programs at Twin Bonanza:

- Mapping and sampling of a complex mineralised vein swarm over an area 600m by 250m with rock chips in excess of 2000g/t gold.

- Further reconnaissance and targeting ahead of drilling at other highly ranked gold targets at the Twin Bonanza Gold Camp including:

(4) McFarlanes - a 1.3km by 1.1km gold anomaly in shallow drilling associated with a porphyry inferred to be analogous to the Buccaneer Porphyry.

(6) The Treasure Dome - a newly identified large scale (6km by 6km) complexly folded, faulted and domed sequence of iron rich sediments and intrusions with no previous sampling and potentially geologically analogous to Newmont's (

NYSE:NEM) multi-million ounce nearby Callie Mine.

Darren Holden, Managing Director of ABM Resources said, "It has been only a year since ABM began to unlock the potential of its extensive tenement holdings in the Tanami-Arunta region of the Northern Territory. We have already achieved a maiden resource at Buccaneer that is open in several directions, drilled and surface-sampled very high gold grades at the Old Pirate Prospect and identified numerous drill targets at the Twin Bonanza Gold Camp. It is great to see the first rig arrive and commence drilling for 2011 after an extended wet season. This year we are commencing drilling from a stronger corporate and financial base, and are developing a growing understanding of controls on mineralisation. The Buccaneer Western Zone was only identified after the last hole of the 2010 season and has the potential to add both, ounces and grade, to our existing resource estimations."

The Twin Bonanza Gold Camp spans an area 40km by 40km and has over 30 targets identified to date. The Buccaneer Porphyry Gold Deposit, with an existing resource of 1.67Moz of gold, and the newly recognized higher grade Western Zone provide the first drill targets for 2011. ABM has contracted Top Drill Ltd of Kalgoorlie, Western Australia for the entire year with planned deep (up to 500m) Reverse Circulation (RC) drilling. A diamond core drill from Boart Longyear is scheduled to arrive on the property in mid May.

ABM is sourcing a third rig for regional work to cover targets such as the Kroda Gold Project and the Lake Mackay Iron Oxide Copper-Gold targets with work scheduled to commence in mid to late May.

About the Twin Bonanza Gold Camp

The Twin Bonanza Gold Camp is centered approximately 22 kilometres south of the Tanami Road and 14 kilometres east of the Western Australia - Northern Territory border. The Project spans the highly prospective "Trans Tanami Structure" an inferred regional / tectonic geological feature which hosts numerous gold deposits including Newmont's multi-million ounce Callie Gold Mine. In 2010 ABM focused its effort at Twin Bonanza on the Old Pirate Prospect - a 3 kilometre anomaly with multiple high-grade zones in quartz veins hosted in sedimentary rocks and the Buccaneer Porphyry Gold Deposit - an intrusive related bulk tonnage gold target. In 2011 ABM is focusing its effort at the Buccaneer Porphyry Western Zone, Old Pirate (trenching, bulk sampling and drilling) and intends to test up to 10 of the regional targets in the wider Twin Bonanza Gold Camp.