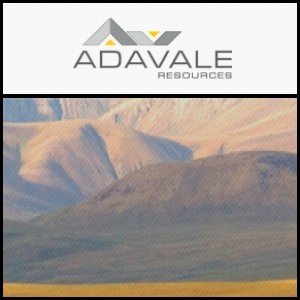 Australian stocks rose in early trade led by strong leads from offshore. The benchmark S&P/ASX200 index was 0.9% higher at 4771.1, while the broader All Ordinaries index had risen 45.3 points to 4848.9.

ASX:ADD) signed a Joint Venture agreement to explore and mine for coal in Indonesia with Mr Haryono Eddyarto, an Indonesian national who is a well-known businessman with over 34 years' experience in the mining and coal trading industries. Adavale will have a 60% interest in the Joint Venture with the remaining 40% to be held by Mr Eddyarto. The Joint Venture is a significant step in Adavale's quest to become an efficient and successful operator in the Indonesian coal industry.

ASX:SFX) today announced high grade iron results from the company's tenements in the eastern Pilbara region of Western Australia. Average grade of 63% Fe was reported with low to moderate levels of impurities. The Company will commence detailed mapping activities to be followed by an initial drilling campaign.

ASX:SCR) has received the first batch of assay results from the Rakkurijärvi-Discovery Zone, Vieto and Sautusvaara Prospects at the Kiruna Iron Project in Sweden. Highly encouraging copper results with a peak grade of 4.2% copper and iron results with a peak grade of 67.6% iron were reported. The company is on track to deliver a global Kiruna Iron Project JORC inferred mineral resource update in July 2011.

ASX:PXG) has completed its second drill program at the Rayjax deposit, part of the Kunanalling Gold Project in Western Australia. All holes intersected gold mineralisation with good potential for extensions. The Rayjax deposit is not currently included in Phoenix's 977,000 ounce Total Mineral Resource and a maiden Resource estimate will be completed during the June Quarter.