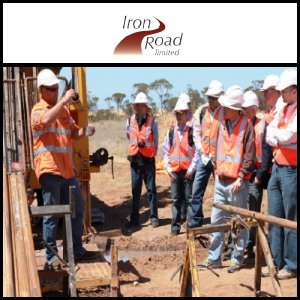 ASX:IRD) is pleased to announce it has successfully raised A$21.6 million to further advance the Central Eyre Iron Project following the recently completed positive prefeasibility study.

- Central Eyre Iron Project PFS identified that project NPV can be lifted from $1.1 billion to over $2.4 billion with an increase in mineral resources from further drilling - funds in part will be used to advance this objective.

- Funds raised via issue of 24.0 million shares at an issue price of $0.90, subject to shareholder approval.

Iron Road Managing Director, Mr Andrew Stocks, said that the funds raised would enable the company to continue on the road to production.

"Our positive prefeasibility study for the Central Eyre Iron Project demonstrated that not only was there significant current value for shareholders, but that considerable value may be added by increasing resources," said Mr Stocks.

"The funds raised today will allow us to continue our aggressive resource drilling campaign and deliver additional large tonnages into the project. We are currently drilling the Murphy South western extension and PIRSA have this week approved drilling over the Murphy South eastern extension. This work will further enhance our position as we continue our partnership discussions.

"I'd also like to acknowledge the support of our existing investors and the significant global institutions that have sought to increase their investment in our company as we progress towards ultimate project development," said Mr Stocks.

The funds raised will be used to:

The placement is subject to shareholder approval on or about the 25 July 2011. A separate Notice of Meeting will shortly be sent to all shareholders.