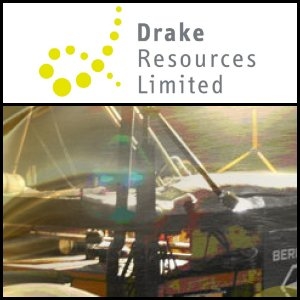 ASX:DRK) said today that drilling at the Conchita gold prospect in Mauritania has confirmed extensive gold mineralisation. Grades of up to 10.23 g/t gold were returned, with all intersections averaging 3.5 g/t gold. The Company is planning a more widespread drilling programme to further explore the mineralisation.

ASX:CTM) has upgraded the JORC resource estimate for its 100% owned Jambreiro Iron Ore Project in Brazil, following the completion of a successful drilling program within the project area. The JORC Resource estimate now stands at 70.6 million tonnes at an average grade of 28.0% Fe, and more than 50% of the resource is classified in the Measured and Indicated categories. This upgrade confirms the potential of the Jambreiro Project to become a cornerstone of the Company's iron ore production business in Brazil.

ASX:UNV) has completed the first phase of resource drilling at the Berenice-Cygnus Coking Coal Project in South Africa and confirmed the presence of coking coal zones over the entire drilling area. The Company is targeting 700-800 million tonnes of coal resources and a resource estimate update is expected to be completed by mid-July.

ASX:SLR) said today that ongoing exploration at its Mount Monger gold operations in Western Australia is progressing very well, with numerous high grade intersections reported. The Company is targeting to increase production from the Mount Monger Operations to 200,000 ounces of gold per annum by 2014. The Haoma mine, part of the Mount Monger gold operations, with a resource base of 65,600 ounces gold, is expected to begin ore production in early July 2011.