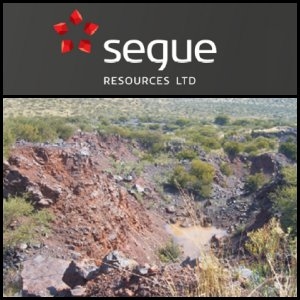 ASX:SEG) has signed an agreement to acquire up to 51% of the Emang Manganese Project in the Postmasburg Manganese Field in South Africa, one of the world's largest manganese fields. The Exploration Target of the Project is estimated at 45-60Mt with a cut-off grade of 28-48% manganese. The Company intends to commence an initial drilling programme in August 2011, targeting specific areas of interest, and move towards commercial production as soon as possible.

ASX:RAD) has identified significant magnetite mineralisation at its Die Hardy project, and the exploration potential of the project is currently estimated at 700-1,200Mt at 29-33% Fe. An RC drilling programme commenced at Die Hardy in May 2011 has drilled 1,921m and will continue into August. The Company intends to produce a maiden resource statement in October/November this year.

ASX:AKI) announced a greater than 80% increase in the aggregate exploration target size at its 80%-owned Mayoko Iron Ore Project in Congo. The new aggregate exploration target size is now estimated at 1.6-2.6 billion tonnes of iron ore mineralisation with a grade range of 30-65% Fe, and approximately 20% (320-520 million tonnes at 40-65% Fe) represents potential DSO and bDSO material. The Company will continue mapping and sampling work to define drill targets.

ASX:RDR) has secured an option to acquire the Nannine Mining Centre in Western Australia. Historical mining at Nannine has produced over 200,000oz of gold from pits and high grade underground, and existing resources are estimated at 59,000oz of gold. Reed Resources will commence detailed validation of all exploration and mining data to determine whether to exercise the option.