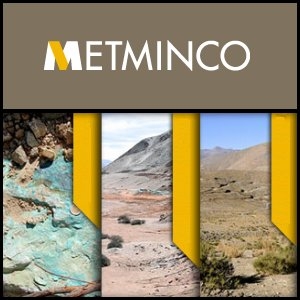 ASX:MNC) said today that drilling at its 100% owned Los Calatos copper/molybdenum project in Peru has indicated the existence of significant mineralization close to surface, and the mineralization extends to at least 1,700 metres below surface. The Company will complete the current drill program to test the full strike length of the mineralization. On completion of these drill holes, Metminco expects to commence an in-fill drill program with a view to completing an updated Mineral Resource estimate during 2012.

ASX:EXE) announced that Katherine-1 well, the fifth well of its 2011 exploration campaign in Queensland, has spudded. The primary target of this well will be shale gas in the Toolebuc Formation of the Eromanga Basin and the secondary target will be conventional oil in the Hutton sandstone. Exoma Energy has 50% interest in the Katherine-1 well and CNOOC (

HKG:0883) is earning its participating interest by a farmin, whereby CNOOC provides the initial A$50 million of joint venture expenditures on Exoma's five Galilee Basin prospects.

ASX:AEE) announced a significantly upgraded resource for its Häggån Project in Sweden. Resource doubled to 631 million pounds of uranium, and is now one of the top three largest undeveloped uranium resources in the world. As the upgrade only covers 15% of the Project area, the Company believes that there is significant potential for further resource growth.