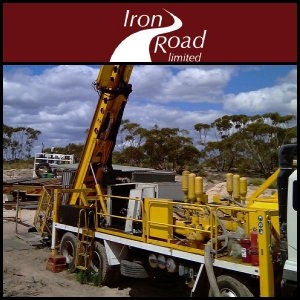 ASX:IRD) is pleased to announce that Stage IV drilling at the Central Eyre Iron Project (CEIP) is complete. The completed drilling programme has allowed for the estimation of an exploration target for the Hambidge prospect.

- A total of four traverses totalling 12 holes were completed for 5,412m.

- An exploration target of 800Mt-1,000Mt magnetite gneiss with a grade of 15-18% iron has been estimated for this prospect.

Hambidge is located approximately 25km to the south of the Murphy South deposit, which forms the basis of Iron Road's prefeasibility study for a 12.4Mtpa operation (Stage I). The Definitive Feasibility Study will consider Stage II expansion options of between 50%-100%.

Cross-sections of traverses A, B, C, and D are presented overleaf. Also included are crosssections that include extrapolation of the magnetite gneiss up and down dip of the drilling, as would be reasonably expected to occur. Conceptual drilling traces are shown using 100m spacing between collars with all holes at -60 degree inclination. The deepest holes are projected to 700m depth, this being the current standard maximum.

The geology intersected in all traverses is consistent with interpretations from inversion modelling of high resolution aeromagnetic surveys. Using extrapolation of the magnetite gneiss on dip and on strike and with guidance from initial assays received, an exploration target for Hambidge of 800-1,000Mt magnetite gneiss with a grade of 15-18% iron is estimated.