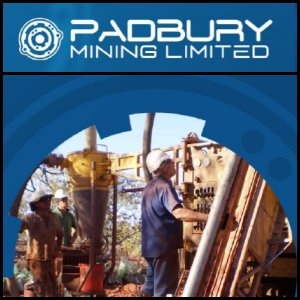 The Telecom Hill DSO target area was recognised from geological mapping and aeromagnetic survey data along strike from high-grade DSO intercepts drilled in 2010.

Mapping indicated that hematite / goethite enrichment had occurred at or near the shale contact of the main BIF unit and this has been confirmed by drilling. The drilling demonstrates that the mineralisation is continuous over 1300m and extends beneath cover and remains open to the west and southeast.

The onsite components of the evaluation programs for the hematite and magnetite are complete. Padbury and CSA Global will review and validate all analytical results as they become available whilst embarking on modelling for JORC compliant estimation work during this quarter.

The Telecom Hill East DSO drilling program was completed during November-February 2011 / 2012 and comprised 33 holes (TH109 - TH141) for a total of 3007m. All holes were drilled at an inclination of -60° to a nominal depth of 100m and had varying directions depending on the strike of BIF stratigraphy.

These latest (and final) results from the Telecom Hill drilling program further emphasise the potential of the deposit and have expanded the mineralised zone to the west. The results support the aeromagnetic interpretation that suggests more mineralisation is likely to occur to the east and west.

The DSO drilling program at the Telecom Hill East target area shows a band of hematite-goethite enrichment occurs in one of the main BIF units within the Robinson Range Formation. The DSO mineralisation extends over a strike length of 1300m to a maximum known depth of 100m (down hole).

All holes were sampled at 1m intervals and analysed for a standard iron suite using fused disc XRF and LOI by TGA at ALS Laboratories in Perth. All assays for this program have now been received.

The Telecom Hill East drilling program indicates the mineralised zone extends approximately 1300m to depths of up to 100m (down hole). The mineralisation occurs as massive hematite and goethite enrichment within the BIF and is most likely the result of a mixture of hypogene and supergene enrichment.

The mineralised zone appears to be conformable with the BIF stratigraphy and is open to the west and southeast (Figure 2). The best intercepts form recent results are displayed in Table 1. The mineralisation has mostly low alumina values and highly variable silica and phosphorus values. LOI values vary according to the relative quantities of hematite and goethite.

A number of key target areas have not been adequately tested to date due to heritage restrictions and difficult access due to steep topography. The mineralisation in the area of holes TH109-113 needs more work as these holes were drilled down dip to avoid heritage sites. These targets will form part of the next round of drilling to better define the DSO deposits in this area.

Now that all of the results have been received, modelling and JORC compliant mineral estimation work has commenced. Independent geological consultants CSA Global Pty Ltd are completing the work.

In 2009, the Peak Hill Project JV partners recognised the potential of the Telecom Hill Deposit area to host significant tonnages of magnetite beneficiation feed ore (BFO), and since then they have undertaken a number of exploration programs to increase understanding of the deposits. In addition to the magnetite potential, a number of small DSO deposits have been investigated to compliment the magnetite project.

The JV partners have committed to the rapid evaluation of the prospect, which to date has included surface rockchip sampling; evaluation RC percussion drilling programs, aeromagnetic interpretation and a detailed geological mapping - all with positive results.

Drilling at the Telecom Hill Prospect to date has tested just 4km of the identified 10km strike length of the targeted area of iron mineralisation. Exploration data indicates substantial potential for delineation of additional mineralisation.