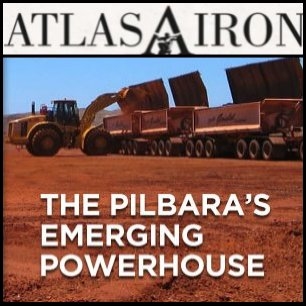 ASX:AGO) is pleased to announce that production has commenced at its third Pilbara iron ore mine, Mt Dove, located 65km south of Port Hedland in WA, representing a key steppingstone towards achieving its near-term Horizon 1 production target of 12Mtpa.

Atlas Managing Director Ken Brinsden said "Atlas has a proven track record in Pilbara mine development having now brought 3 mines into production within 4 years. The Company is on target to bring 5 mines into production in 5 years with the addition of the Abydos Mine in June 2013, and the first phase of the Mt Webber Mine (subject to Board approval) in December 2013.

"I would like to take this opportunity to thank our staff, contractors and all of our service providers for their great assistance in bringing Mt Dove into production on time and within budget," Mr Brinsden added.

With the commencement of production and haulage at Mt Dove, Atlas remains on track to export between 7.2Mt and 7.7Mt in the 2013 financial year.

The first blast at the Mt Dove Mine occurred on 28 October 2012. First ore was mined in November 2012 and with crushing and screening plant commissioning now complete, high grade production has commenced. Haulage to port will commence within the week.

Production from the Mt Dove mine will increase Atlas' north Pilbara production rate to 8Mtpa in the March 2013 Quarter and while the mine life at the project is relatively short, the grade contribution will enhance the Atlas' North Pilbara blending opportunities.