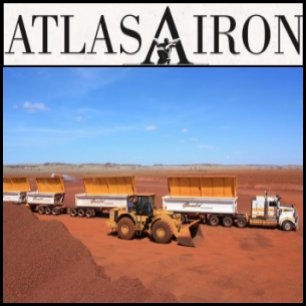 ASX:AGO) is pleased to announce that its total Pilbara Ore Reserves have increased by 21% to 499Mt, further strengthening the Company's existing operations, near term development projects and its longer-term growth strategy.

The upgraded Reserve estimate, which compares with the previously published figure of 30 June 2012, includes a 21% increase at Mt Dove, where production started recently, and a 25% rise at Abydos, where construction is underway. The increase also includes a 98% jump in Reserves at McPhee Creek. Further Reserve increases at McPhee Creek are a significant result given the key role the project is set to play in Atlas' Horizon 2 growth option.

The Ore Reserve update is inclusive of mining depletion at Pardoo and Wodgina.

Atlas Managing Director Ken Brinsden said the substantial Reserve growth, particularly at McPhee Creek, was the result of Atlas continued reinvestment in the Company through the extensive drilling programs, engineering and ongoing feasibility works conducted over the past 18 months.

"Atlas is delivering on its strategy of generating strong production increases today while laying the foundations for substantial growth over the longer term," Mr Brinsden said.

"We shipped at a record annualised rate of 7Mtpa in the December 2012 Quarter and we are on track to hit 10Mtpa by the end of June this year, on the back of the production start-up at Abydos where construction is now well underway. At the same time, we are growing the Ore Reserves to underpin our Horizon 2 growth options" Mr Brinsden added.

Further details to this Reserve upgrade can be found in the Atlas Iron announcement, at the link below:
http://media.abnnewswire.net/media/en/docs/74645-ASX-AGO-624053.pdf