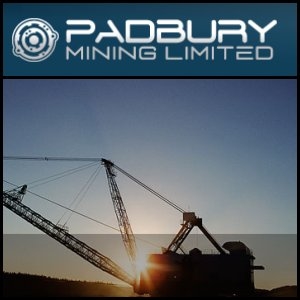 ASX:PDY) is pleased to announce the acquisition of a new tenement E52/2993, (formerly E52/1851, E52/2163 & E52/2412), consisting of 18 sub blocks located in close proximity to its current holdings in the Peak Hill mining district. Padbury Mining Limited has acquired all mineral rights to the tenement.

The Peak Hill district forms part of the inland Gascoyne region which surrounds the historic Peak Hill goldfields. It is an area which has become the focus of exploration activity for iron ore by Padbury Mining Ltd and the tenement is contiguous to its existing holdings.

The decision to proceed with the acquisition follows a comprehensive review and assessment of geological data held by Meteoric Resources, a former owner of the tenement.

A key strategy within the company's three year Business Plan is the diversification and growth of the company's project opportunities through extensive exploration and acquisition of new tenements/projects with a view to positioning itself as a key participant in the development of iron ore projects in the Mid-West region of Western Australia.

The acquisition of this tenement falls clearly within that strategy particularly given its proximity to Padbury's existing tenements and its alignment with the Mt Padbury exploration target areas as can be seen in Figure 1.

Padbury believes the tenement is highly prospective for iron mineralisation. The tenement is approximately 15 km from the settlement of Peak Hill and 114 km north of the town of Meekatharra in the Mid West region of Western Australia. The rocks of the area include the Paleoproterozoic Bryah and Padbury Groups in the west and the Yerrida Group to the east and southeast. The iron rich rocks of the Padbury Group form a prominent magnetic anomaly.

The project covers the eastern limb and fold hinge area of the Millidie Syncline, including the Robinson Range Formation, which is a Proterozoic sequence of banded iron-formation, siltstone and hematitic shale. The tenement covers a cumulative strike length of about 13 km of iron formations.

Studies of remote sensing images and aeromagnetic data, together with the historical sampling results, have outlined several areas of potential hematite-goethite enrichments, providing attractive targets for sampling and drilling. The hematite and goethite occurrences are interpreted to result from alteration and enrichment of the magnetite-bearing BIF, particularly in areas of complex folding. Significantly, mapping by GSWA has confirmed the presence of hematite and goethite deposits on the tenement.

The acquisition of the tenement, with associated data, will improve the company's asset base as it moves towards the monetarisation of its core iron ore assets. 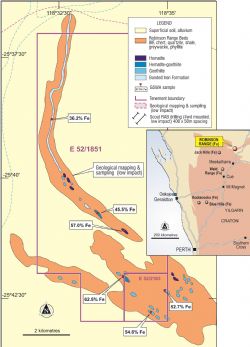 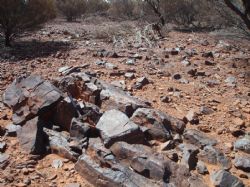