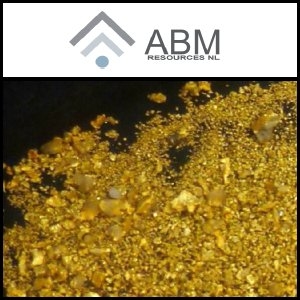 ASX:ABU) is pleased to announce that both ABM and Clancy Exploration Limited ("CLY" or "Clancy") have completed their respective due diligence phases and are proceeding with the transaction as announced on 29th November, 2013.

Clancy has advised ABM of the exercise of their option, for an exercise fee of $150,000, under an agreement with ABM (refer announcement dated 29 November 2013), whereby Clancy will acquire 100% of ABM's interests in the North Arunta regional projects. The completion of the agreement remains subject to various conditions including regulatory and shareholder approval.

Upon completion of the agreement ABM will receive the following consideration:

- 175 million(note:1) options to acquire fully paid shares in the capital of Clancy, exercisable in three tranches within three years at a price 50% above the Clancy capital raising.

Darren Holden, Managing Director of ABM Resources said, "We are very pleased that Clancy has rigorously worked through the large regional datasets from the North Arunta Projects and is proceeding with the transaction as previously announced. We see great potential in the North Arunta district and look forward to Clancy building value via accelerated exploration in this region. Whilst we intend to stay very close to Clancy and aim to provide them with as much assistance as required, ABM's core focus is the development of the Old Pirate High-Grade gold deposit and consolidation of exploration activities in the Tanami region where the Company retains more than 11,000 square kilometres of prospective exploration licenses."

1 Assumes a raising at 2 cents per share. Should the price vary the number of shares and options will be adjusted.

2 Consideration shares and options may be subject to restriction arrangements in accordance with ASX listing rules. 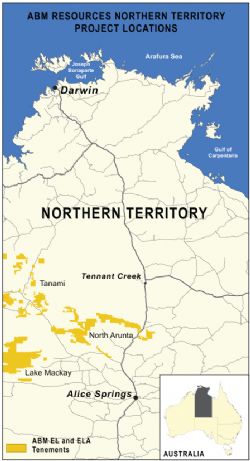 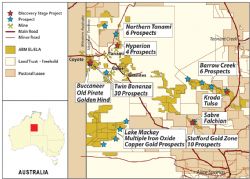