OTCMKTS:BALMF) today reported the results of the winter 2014 drill program on the Company's wholly owned Martiniere Property. Results are highlighted by an intercept of 1,138 g/t (33 oz/ton) gold over 4.87 metres from the Bug Lake Footwall Zone, which includes a property record intercept of 9,710 g/t (312 oz/ton) over 0.57 metres. This intercepts sits within a 71.05 metre wide gold mineralized interval cutting the Footwall and Bug Lake Gold Zones. This high-grade intercept and others in today's release continue to emphasize the high to bonanza-grade nature of the Bug Lake Footwall Zone. Holes MDE-14-143 and -144 also successfully extended the Bug Lake and related gold zones to a vertical depth of 400 metres, including an intercept of 8.25 g/t gold over 14.53 metres associated with the lower steep (see Figure 1 - Cross Section 1+62.5 North and "Steeps and Flats" in link below). The Zones remain open below this depth for potential expansion.

Testing of the southern extension of the Bug Lake Gold Trend, (see Figure 2 - Plan Map and Figure 3 - Cross Section 3+25 South in link below) 500 metres to the south of MDE-13-143, has identified high-grade gold mineralization associated with a newly identified "steep" section of the Bug Lake Fault Zone. Hole MDE-14-142 returned intercepts of 9.35 g/t gold over 5.17 metres and 4.78 g/t gold over 2.65 metres from the upper and lower contacts of the Bug Lake porphyry in the deepest hole to date along the southern extension.

"As impressive as the bonanza grades continue to be at Bug Lake, the confirmation of continued high-grade intercepts at depth and the discovery of another high-grade "steep" along the southern extension of the Bug Lake Gold Trend emphatically demonstrate the continued up side and expansion potential of this system" said Darin Wagner, President and CEO of Balmoral. "With excellent results from Martiniere and a very exciting new nickel-PGE discovery at Grasset our exploration team is 'firing on all cylinders' and unlocking numerous opportunities for Balmoral and its shareholders."

During the winter 2014 program Balmoral completed fifteen holes along the northern segment of the Bug Lake Gold Trend. Drilling was successful on multiple fronts, extending open ended portions of the Bug Lake and related gold zones in the near surface, extending the zones to depth beyond the limits of previous drilling, confirming the current exploration model, intersecting high-grade gold mineralization from the second, down-dip, "steep" along the Bug Lake structure and returning the single highest grade intercept to date from the Detour Gold Trend Project.

Holes MDE-14-124 to -128 successfully extended the high-grade Hanging Wall Zone in an area of historically sparse testing and appear to have also intersected a new near surface vein zone. Additional testing is warranted in this area to attempt to expand the Hanging Wall Zone and test the new vein zone.

Holes MDE-14-129 to MDE-14-135 were drilled to provide detailed in-fill and additional geological information in the area peripheral to the high-grade Footwall Zone and marginal phases of the Hanging Wall Zone.

Holes MDE-14-143 and MDE-14-144 represent two of the deepest tests of the Bug Lake Gold Trend to date and add considerably to the Company's understanding of the geometry and potential of the lower, down-dip "steep" section of the Bug Lake Zone. These holes successfully extend the Bug Lake Gold Zone to a vertical depth of 400 metres and provide solid evidence of the continuation of the high-grade gold mineralization to minimum depths of 315 metres supporting the current geological model. The gold bearing system remains open to depth.

As previously discussed, the Bug Lake Gold Trend is characterized by steeply dipping segments ("steeps") which are connected by shallowly, east dipping, segments ("flats") producing a somewhat sigmoidal pattern to both the Bug Lake porphyry and gold mineralized zones (see Figure 1 in link below). Drilling to date has intersected significantly greater thicknesses, and typically higher grades, along the steeps. Drilling along the northern, 375 metre long, segment of the Bug Lake Gold Trend has intersected a steep in the near surface and has now demonstrated the presence of a second, well mineralized steep at depths ranging between 150 and 400 metres extending beyond the current vertical level of testing. Overall the mineralized system along the northern segment has a plunge to the south.

Until the winter 2014 program, insufficient drilling had been completed along the southern extension of the Bug Lake Gold Trend to determine if the intercepts reported to date reflected Flats or more favourable steeps. Four holes, including three from the winter program, completed on cross-section 3+25 South (Figure 3) indicate that the near surface intercepts along much of the southern extension are in fact characterized by flat or moderate dips. The first steep on section 3+25 south was intersected, along with higher grade gold mineralization, at depths between 150 to 225 vertical metres and remains open to depth. The recognition of this geometry continuing to the south opens up significant potential for discovery of additional high-grade gold mineralization along the sparsely tested southern extension at relatively shallow depths.

Holes MDE-14-140, -141 and -142 were drilled on cross-section 3+25 south (Figure 3 in link below), with the deepest hole, MDE-14-142, intersecting the first confirmed steep along the southern extension. This hole features two high-grade gold bearing intervals located along the upper and lower contacts of the Bug Lake porphyry, similar to high-grade mineralization defined along the northern segment of the Trend. This high-grade mineralization is open in all directions, with hole MDE-14-142 representing the deepest test of the southern segment of the Bug Lake Zone to date.

The Bug Lake and associated gold zones parallel a 20 to 50 metre wide NNW-trending, steeply east-dipping fault zone (the Bug Lake Fault) which separates mafic intrusive and mafic volcanic lithologies on the Martiniere Property. A 5 to 30 metre wide NNW-trending felsic porphyry dyke is located within the fault corridor. Gold mineralization occurs in distinct shear-vein zones in the Footwall and Hanging Wall to the porphyry, as well as within silica-flooded fault breccias (Bug Lake Zone) which are typically best developed in the footwall or immediate hanging wall to the porphyry. Gold mineralization in the Bug Lake area is associated with disseminated pyrite mineralization, with the high to bonanza grade intervals frequently containing abundant fine free gold.

Plans for the summer 2014 drill program at Martiniere are currently being finalized, with drilling expected to resume in late June or early July with the focus on additional expansion and infill drilling along the northern segment of the Bug Lake Gold Trend, additional testing of the newly identified steep along the southern extension and testing of several other high priority targets within the broader Martiniere gold system. 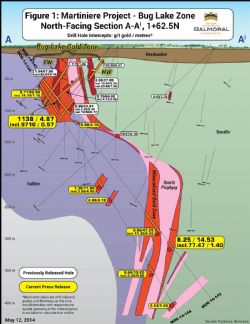 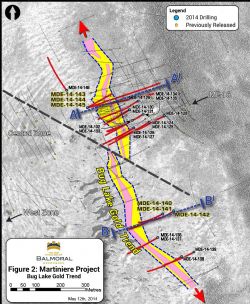 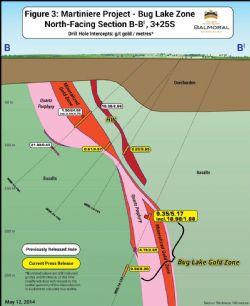