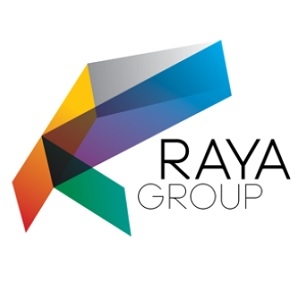 ASX:RYG) and Bakrie Power have entered into a Heads of Agreement ("HoA") with Space Con Pty Ltd ("SpaceCon") for the sale and purchase of the Sokoria Geothermal Project.

Space Con and their partners are currently undertaking due diligence during January 2015 to finalise their intention under the agreement.

At the termination of the due diligence period the parties upon SpaceCon's satisfaction will enter into a Sale and Purchase Agreement ("SPA") for the Sokoria Geothermal Project whereby SpaceCon agrees to purchase 85% equity in Sokoria Geothermal Indonesia ("SGI"). SpaceCon will pay a deposit of USD $250,000 into an agreed escrow account as per terms and conditions stipulated in HoA whilst all parties await PT PLN Persero ("PLN") decision and acceptance of sponsor and shareholder amendment to the PPA.

Upon PLN's approval SpaceCon will pay the following:

Raya will continue to provide further updates once the due diligence period concludes.

In early December 2014, the Company announced its intent to enter into a Joint Venture ("JV") with Empire Energy Group (

ASX:EEG) for the acquisition and development of acreage in Northern Oklahoma.

The JV agreement was signed on 29 January 2015 with Empire Energy as the Operator. To date, the companies have leased +7,000 net acres on very competitive terms. Under the JV agreement each company will contribute 50:50 towards a low cost vertical well program. The JV gives the Company the ability to consolidate a larger contiguous acreage position allowing for more efficient development through economies of scale and cost sharing.

Whilst there is no commitment to commence drilling in the near term, the companies are preparing an initial drilling program to commence during the first half of 2015.

Further updates will be made to the market over the coming months.

As per announcement on 14th January, Raya was pleased to advise on the appointment of Mr Daniel Lanskey to board. He has over 10 years' experience in the energy industry and from 2006 until January 2014 was a Founder and Managing Director of Austex Oil Limited (

OTCMKTS:ATXDY), which is now a successful US operating oil and gas production company.

At AOK, Mr Lanskey oversaw the Initial Public Listing on the Australian Securities Exchange and subsequent listing on the OTCQX and TSXV and was integral in all capital raising undertaken by the Company. Prior to the oil and gas industry he was involved in the Information Technology industry both in Australia, Asia and North America. He is also a Director of ASC Resources Pty Ltd, a substantial shareholder in Raya Group.

Raya advised to the market on 23rd December it had completed a placement of $200,000 to sophisticated investors under Section 708A. ASC Resources as a significant shareholder in Raya continued its support by further subscribing for some of the shares.

The funds raised were for working capital and ongoing development costs.

On the 27th November an Annual General Meeting ("AGM") was held to put forward the Company's Financial Reports and consider a number of resolutions to shareholders.

The Company is pleased to advise all resolutions were passed in favour.

Raya and its JV partner Bakrie Power has entered into a Head of Agreement ("HoA") with Space Con Pty Ltd for the Sokoria Geothermal Project. The agreement allows Space Con short period of time to conduct its final due diligence and ends 4th February before moving to a Sale and Purchase Agreement.

All other in-country works have been put on hold.

No other direct works were completed on any of the Australian tenements during the quarter, other than in respect of licence renewals and the like to ensure that all of these tenements remain in good standing.

Raya was pleased to announce its recent appointment of Mr Daniel Lanskey as Managing Director to the board. Raya looks forward to continuing to work with Mr Lanskey and his team at ASC Resources.

Mining Tenements held at the end of the Quarter:

Penola Trough: Areas GEL 223 area in the south-east of South Australia. These tenements are 100% owned by the Raya Group.

Limestone Coast: Areas GEL 611 area in the south-east of South Australia. These tenements are all 100% owned by the Raya Group.

Sokoria Geothermal Project: a Joint Venture with PT Bakrie Power, for a 30 MW geothermal development on Flores Island, Indonesia, with Raya holding a 45% interest in the project.

Ngebel Geothermal Project: a Joint Venture with PT Bakrie Power, for a 165 MW geothermal development on East Java, Indonesia, with Raya earning into a 35% interest in the project.

Dairi Prima Geothermal Project: a Joint Venture with PT Bakrie Power, for a 25 MW geothermal development in Northern Sumatra, Indonesia, with Raya holding a 51% interest in the project.

XPED Ltd (ASX:XPE) is an Australian Internet of Things (“IoT”) technology business. Xped has developed revolutionary and patent-protected technology that allows any consumer, regardless of their technical capability, to connect, monitor and control devices and appliances found in our everyday environment. Xped provides technology solutions for Smart Home, Smart Building, and Healthcare. 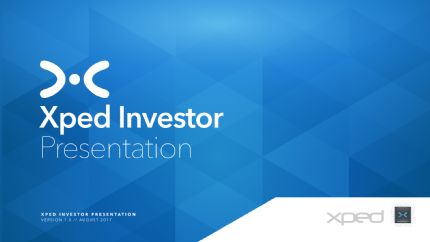 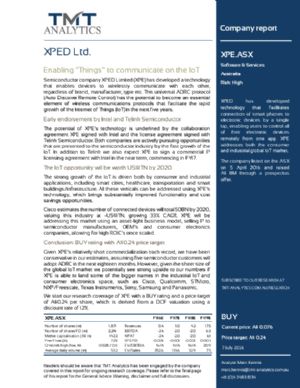