ASX:ABU) has completed the re-optimisation of open pit designs and prepared a revised production forecast for the Old Pirate Gold Mine.

The re-optimisation study did not support significant modification of the original pit designs for Old Pirate. The principal changes now being implemented from this exercise involve final design depths of the Old Pirate Central and Old Pirate South pits being reduced by 10 metres and 25 metres respectively. It was concluded that cutting back the walls on any of the pits to extend mining at depth was not economically viable, based on currently available processing options.

The mining inventory has been revised within the new pit designs through the application of a 50 g/t topcut and modified inventory loss and dilution factors for each pit that have been derived from operating experience to date. The revised mining inventory remaining at 1 December 2015 was approximately 50,000 tonnes at an estimated grade of 6 g/t for approximately 9,500 ounces of contained gold. Mining at Old Pirate is scheduled to be completed by early April 2016.

Including run of mine stockpiles, the total inventory available for processing at 1 December 2015 is estimated to be 70,000 tonnes grading 5.5 g/t, from which 12,000 ounces of gold are forecast to be recovered. To improve the economics of processing lower grade run of mine stockpiles, consideration is being given to introducing continuous processing in place of the two weeks on / one week off cycle employed to date. Under this scenario, processing is forecast to be completed by the end of April 2016.

Upon the completion of processing, the recovery of gold in circuit, including mill lock-up, is forecast to raise production for the period from 1 December 2015 to mine closure to approximately 14,000 ounces.

Rehabilitation of the Old Pirate mine site continues to be carried out concurrently with mining and is expected to be largely complete by the end of April 2016, when all mining equipment, infrastructure and accommodation will be demobilised.

The Next Steps for ABM in the Tanami

As previously advised, the current phase of mining at Old Pirate has not achieved targeted financial performance due to the discrepancy between the estimated mining inventory and mill reconciled production. However, significant technical data has been obtained from the exercise, leading to an improved understanding of the geology and mineralisation in the area. A significant constraint on the current operation has been the high cost per tonne of haulage and processing at the small scale Coyote Processing Plant. There is scope to revisit Old Pirate and potentially develop a more extensive and financially robust mining operation if a larger scale, lower cost processing option can be established.

The Company considers there to be potential for the development of a large scale mining and processing operation at the wholly owned Buccaneer Porphyry Gold Deposit, located just five kilometres from Old Pirate. If proven viable, this could also present an alternative processing option for future mining at Old Pirate and potentially some of the many other advanced prospects that have been identified at the Twin Bonanza Project.

Buccaneer hosts Indicated and Inferred Mineral Resources totalling 1.1 million ounces at a 1.0 g/t cut-off grade or 2.7 million ounces at a 0.2 g/t cut-off grade. Details of the Mineral Resource estimates are presented in the table appended to this announcement. Preliminary metallurgical test work carried out on samples of Buccaneer mineralisation has demonstrated excellent gold recoveries using conventional cyanide leaching at grind sizes from 75 µm to 150 µm and also achieved good performance on material crushed to 10 mm, indicating potential for processing via heap leaching.

The outcome of the conceptual study will help guide further, more detailed evaluation of financial viability and development options for the Buccaneer Project. Old Pirate will then be considered independently as a potential supplementary source of feed for any Buccaneer processing facility.

Exploration carried out by the Company to date has identified numerous prospects that warrant further evaluation. A systematic assessment of individual exploration targets is underway that will contribute to prioritisation of future work programs and assist in defining the prospects that are to be classified as core elements of the Company's business.

As previously reported, the Company is seeking to attract other parties to fund exploration and earn an interest in non-core areas of its substantial Northern Territory land holdings. Discussions have taken place with a number of interested parties, but no further agreements have been entered into at this stage.

During November 2015, 16,556 tonnes were mined at Old Pirate with a mill reconciled grade of 6.2 g/t gold. Mill throughput was 12,801 tonnes at a reconciled head grade of 6.8 g/t gold, with 2,779 ounces of gold recovered. The provisional mill feed grade, based on hourly sampling of the mill feed conveyor, exceeded reconciled mill head grade, leading to expectations of higher gold production than was achieved.

Life of mine monthly production is presented in the graph (refer to link below).

The Company and Interim Chief Executive Officer, Mr Brett Lambert, have agreed to extend the latter's employment contract for an additional three months to 16 May 2016, thus covering at least the remaining period of mining at Old Pirate and the mine closure process. 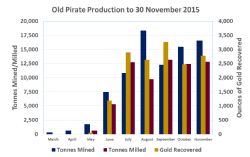 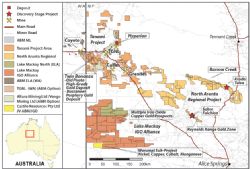