ASX:ABU) is pleased to provide an update on operations at the Old Pirate Gold Mine during December 2015.

Production during December exceeded the level forecast in the revised mine plan for the operation (ASX release of 24 December 2015). The tonnage of ore mined and processed and the ounces of gold recovered to circuit and poured were all higher than any preceding month, as shown in the graph in link below.

Operations remain on track to achieve the targets set in the revised mine plan. Additional processing plant operators and maintenance staff have been engaged to enable processing to be carried out on a continuous basis, in place of the previous roster of two weeks on / one week off, from now until mining ceases in April 2016.

Production details for December and the project to date are presented in the link below. 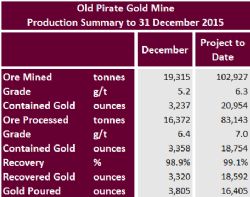