ASX:ABU) is pleased to provide an update on operations at the Old Pirate Gold Mine during January 2016.

Continuous processing, introduced in mid-January 2016, contributed to record mill throughput for the month. Gold production in January exceeded the level forecast in the revised mine plan for the operation (ASX release of 24 December 2015) despite head grade being below target as some stockpiled low grade material was processed in order to achieve the higher throughput.

The tonnage of ore mined also exceeded the target set in the mine plan. However mining activity in early February 2016 has been impacted by heavy rainfall. The rain had minimal impact on processing as stockpiles were able to be drawn on. Mining operations have since returned to normal and the project remains on track to achieve the production targeted in the revised mine plan.

Project to date mine production, plant throughput and recovered gold are shown in the graph (in link below), with production details summarised in the table in link below.

The Company has reviewed the carrying values of some of its assets following changes to mine development plans at the Old Pirate Gold Mine and the re-assessment of non-core exploration tenements.

As foreshadowed in the December 2015 Quarterly Report (ASX release 29 January 2016), the Company expects to recognise impairment charges of between $18 million and $20 million against the carrying values of its Exploration, Evaluation and Development Expenditure and Mine Properties.

The impairment has no effect on the Company's cash position or on-going business activities.

Final asset carrying values will be determined following the completion of the half year audit and released in conjunction with the interim financial results in early March 2016. 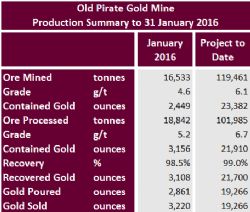