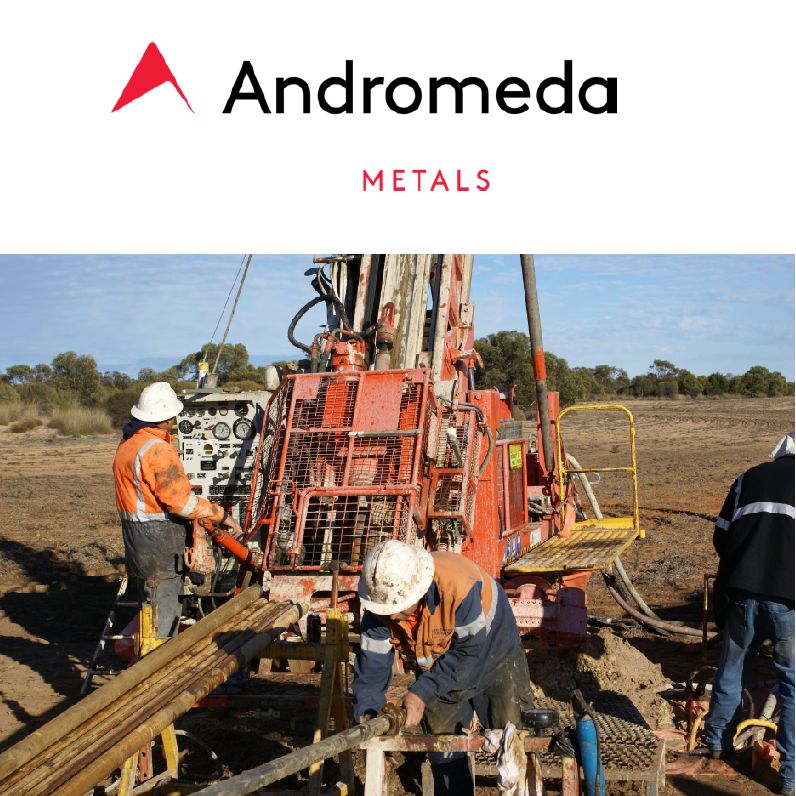 ASX:ADN) holds the Moonta copper project, located on the Yorke Peninsula in South Australia (see Figure 1 in the link below). The project area is highly mineralised and includes numerous historically mined deposits, as well as more recent copper discoveries including the Bruce Zone at Alford West and the Wombat deposit located approximately 3km to the west.

- The Wombat and Bruce deposits on the Moonta project have attributes that may allow copper production using innovative hydrometallurgical in-situ recovery (ISR).

- At both deposits copper mineralisation occurs in deep subvertical weathering troughs that extend hundreds of metres below the surface.

- Estimated combined Wombat and Bruce Exploration Target is 80 to 120 million tonnes at a grade of 0.18% to 0.23% copper (145,000 to 275,000 copper tonnes), comparable to resources at international ISR copper projects. The potential tonnage and grade of the Exploration Target is conceptual in nature as there has been insufficient exploration to estimate a Mineral Resource, and it remains uncertain if further exploration will result in the estimation of a Mineral Resource.

- Weathered material in the troughs appears to be both porous and permeable, allowing lixiviant flow and copper phase contact, while the troughs are enclosed by fresh impermeable rock that can prevent lixiviant escape.

- Simple, preliminary leach tests on composite samples confirm copper solubility of up to 65%, and lixiviant studies to optimise copper into solution appear warranted.

- Both deposits are open along strike, and interpretation of exploration data has identified excellent opportunities to discover additional nearby mineralisation.

- Discussions are now underway with groups with ISR expertise and the technical capacity to advance the project.

Past exploration efforts have focused on delineating deposits for conventional mining, however Bruce and Wombat have a number of critical attributes that may allow hydrometallurgical in-situ recovery (ISR) copper production.

What is in-situ recovery?

In-situ recovery (ISR) is a production process used to recover minerals using a fluid circulated via drilled wells. During the process a leaching solution (or "lixiviant"), is injected into the mineralisation via a borehole, passes through the deposit leaching the target commodity, and is returned to the surface via a second bore where the dissolved metal is extracted from solution by SXEW or ion exchange in a processing plant (see Figure 2 in the link below).

ISR is used to produce salts, uranium and copper, with around 50% of the world's uranium now won using ISR, including at the Beverley uranium mine in South Australia.

The costs of ISR are substantially below those of conventional mining, allowing production from much lower grade deposits.

For example, a recent feasibility study by TSX listed Excelsior Mining Corp for its Gunnison ISR copper project in Arizona (see Note below) is based on a Probable Mineral Reserve of 782 million short tons at a grade of 0.29% copper. ISR is planned to recover around 49% of the copper reserve with capital costs estimated to be US$46.9 million, and life of mine operating costs of US$0.65/lb.

As no significant surface disturbance is required, an ISR operation could concievably be conducted in conjunction with current agricultural landuse, and once completed have little on-going impact.
Critical deposit characteristics for ISR For a copper deposit to be amenable to ISR production it must possess a number of critical natural mineralogical and hydrological characteristics, including:

- Copper must be present in minerals that are soluble, such as carbonates, oxides and some secondary sulphides.

- Mineralised material must be both porous and permeable, allowing lixiviant-copper mineral contact and through flow.

- Non-target mineral phases which consume lixiviant should not be present in significant amounts.

- Mineralisation should be below the natural water table to enable control of the lixiviant flow path.

- Non-permeable barriers ("aquacludes") should be present to restrict the lixiviant to the mineralisation and prevent ground water contamination.

The Wombat and Bruce deposits

The Wombat and Bruce prospects are located in the north of the project tenement, with Bruce one of several mineralised zones discovered at the Alford West prospect.

The majority of the weathered material contained in the troughs is mineralised. Wombat hole MPD-06-22 hit 174 metres at 0.20% copper, while WOMDD001 intersected 115 metres at 0.53% copper, with very few samples assaying less than 0.05% copper, a commonly quoted lower cut-off grade used for ISR resources.

Copper minerals observed in the weathering trough mineralisation include those typically seen in the weathered profile of copper sulphide deposits. These include chalcocite (Cu2S), native copper, rare copper carbonates, and a black oxide phase tentatively identified as tenorite (CuO). Chalcopyrite is present but rare.

3-dimensional models of the weathering troughs at both Wombat and Bruce were constructed using available drillhole data (see Figures 4 and 5 in the link below) and tonnage ranges estimated by applying a density factor of 1.8 t/m3 to the model volumes.

The 3-D models are restricted to the troughs where they fall below the water table and below the normal depth of weathering.

Based upon this work Andromeda Metals estimates a combined Exploration Target for the Wombat and Bruce troughs of 80 to 120 million tonnes at a grade ranging between 0.18 to 0.23% copper for 145,000 to 275,000 tonnes of copper.

The depth of the troughs is the least known variable. A single hole at Wombat has passed beneath the trough giving an indication of depth, however no holes pass below the Bruce trough.

As currently modelled, the Wombat trough represents the larger of the two deposits, contributing approximately 70% of the Exploration Target tonnage. The estimated grades of both deposits are very similar.

The Exploration Target tonnage and grade range is comparable to the resource metrics of international ISR copper projects.

While the weathering troughs at both Wombat and Bruce are fairly uniformly mineralised, there are internal zones of higher grade copper which would allow estimation of higher grade resources.
A description of the historic exploration activity upon which the Exploration Target is based is included in Appendix 1 (see the link below). Table 2 (see the link below) lists all drill intersections that fall in the 3-D model volume shells for the two prospects.

Both the Wombat and Bruce troughs remain open along strike and potential to increase the Exploration Target, and ultimately Mineral Resources, is high.

Very limited drilling has tested the 3km interval between the two deposits and this area represents an excellent target area to find additional mineralisation (see Figure 6 in the link below).

Following advice from a CSIRO scientist with expertise in ISR technology, 24 composited samples of trough material from Wombat and Bruce were submitted for a simple first pass acid solubility test.

The composite samples were collected from Wombat diamond holes WOMDD001 and WOMDD002, and Bruce RC holes AWRC006 and AWRC008. Composited downhole lengths ranged between 5 and 10 metres, with the composites selected to give uniform coverage of the trough material where original assays confirmed the presence of copper mineralisation.

Acid soluble analyses were conducted on pulverized samples using 4% H2SO4 agitated for 1 hour, with the solutions then read for copper. Soluble copper ranges up to 0.97% at Wombat and 0.48% at Bruce.

Head assays using a total digest method were completed to allow calculation of copper recovered to the leaching solution. At Bruce the percentage of the total copper leached from each composite ranged from 41% to 56%, averaging 49%. At Wombat, soluble copper recoveries ranged from 0% to 65%, averaging 35%. The results are listed in Table 1 (see the link below).

Significant copper is leaching into solution after one hour, confirming it to be present in soluble mineral phases. Trialing of different leaching times and reagents, or the addition of reagents to assist copper solubility, are considered likely to improve the recoveries to solution.

Drill hole assay data and acid drop tests on the weathered drill samples do not indicate the presence of non-copper bearing, acid consuming phases such as carbonate.

Modelling of weathering trough hosted copper mineralisation at Wombat and Bruce supports an Exploration Target ranging from 80-120 million tonnes at a grade ranging from 0.18-0.23% copper, comparable to the resource metrics of international ISR copper projects.

Both deposits remain open along strike, presenting opportunities to find further mineralisation in the trough extensions.

The hydrological characteristics are positive. The mineralised material in the weathering troughs is porous and likely permeable, and sits below the water table and below sea level. The troughs are bounded to both the north and south by fresh and impermeable bedrock that form natural aquacludes.

Preliminary metallurgical testwork confirms that copper is present in phases amenable to leaching, with improved recoveries anticipated with leachant optimisation. Non-copper bearing minerals that might consume ISR leachant, such as carbonates, have not been observed in the weathering trough hosted mineralisation.

The sub-vertical morphology of the weathering troughs could allow both injection and extraction wells to access hundreds of vertical metres of mineralisation with positive implications for the number of injection and recovery wells required and hence capital costs.

The natural ground water is highly saline and consequently is not used for any domestic, agricultural or industrial purpose, minimising third party impact.

The area required for surface installations of an ISR operation are modest compared to conventional mining. An ISR operation could concievably coexist with agricultural landuse and leave little post-production impact.

Technical investigations required to advance evaluation of the ISR potential of Wombat and Bruce include:

- Investigation into the leachability of gold and cobalt which accompany copper mineralisation at grades potentially material in an ISR operation.

- Laboratory and field tests to establish the permeability of the mineralised zones, leading to pilot field leach tests.

Andromeda Metals is currently in discussion with three groups regarding a deal on the Moonta project. Two of these groups have recognised the ISR potential at Wombat and Bruce and, importantly, have the in-house technical expertise to advance an ISR project.

The Company trusts that the substantial resource potential and positive technical and hydrological attributes already established at Wombat and Bruce will be positively regarded by the third parties. 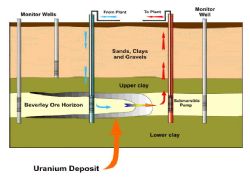 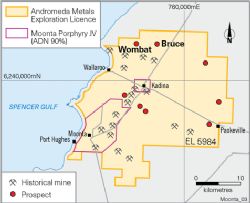 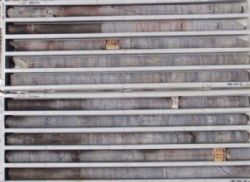 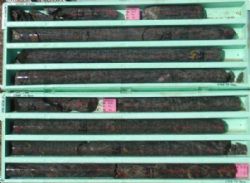 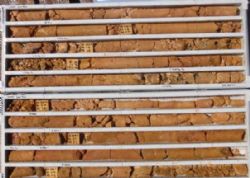 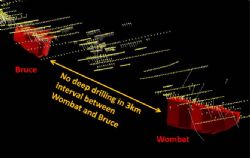