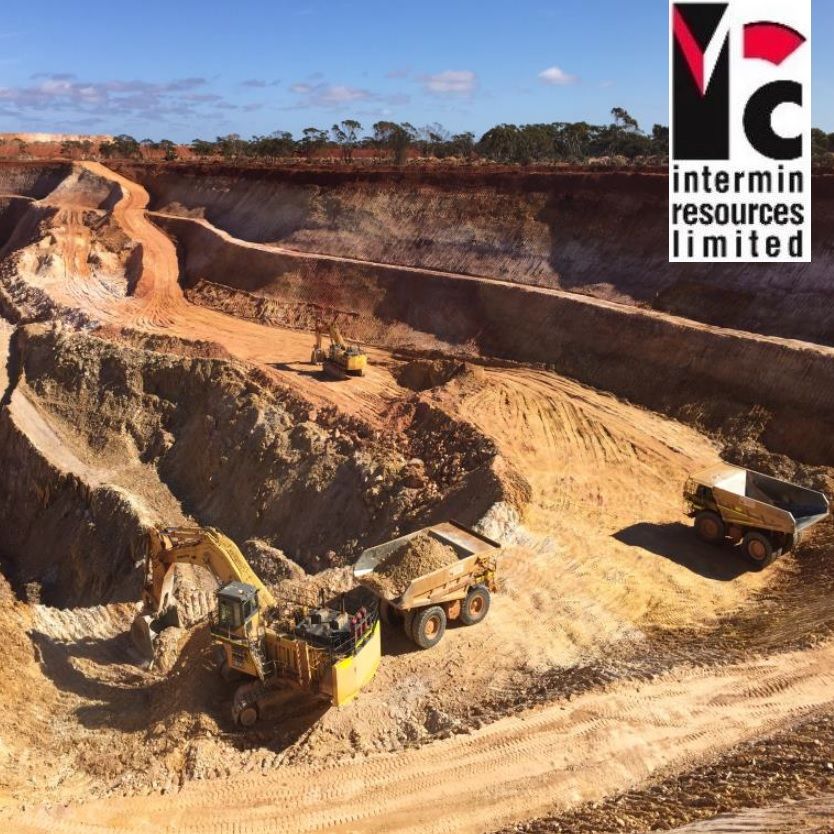 ASX:IRC) ("Intermin" or the "Company") provides the following joint venture (JV) update from Intermin's 100% owned JV project areas in Western Australia and Queensland (see Figures 1 and 2 in link below). In total, the JV project areas cover over 2,000km2 of prospective tenure and hosts mineralisation including gold, vanadium, molybdenum, copper, nickel, Platinum Group Elements (PGEs) and zinc. Joint venture partners can earn up to 65% - 75% after satisfying expenditure commitments of over A$20 million through to 2021 (see Note 1, 2 below).

ASX:EGS) commences exploration drilling as part of the Menzies - Goongarrie Gold JV with results expected in the September Quarter 2018

ASX:EVN) withdraws from the Binduli Gold JV with 100% ownership reverting to Intermin and drilling commencing in the current June Quarter 2018

ASX:MTH) continues exploration at the Nanadie Well JV with current focus on copper at Nanadie Well and Stark, zinc at Sandman and gold at Kombi

ASX:SAR) preparing to commence drilling at the Lehman's Gold JV with Intermin retaining a 10% free carried interest to a decision to mine

"Intermin's strategy of entering into joint ventures with well-credentialed partners for its non-core projects allows it to focus on its strategy of building a mid-tier gold business in the West Australian goldfields while giving shareholders exposure to active programs across a range of commodities."
"The earn-in JVs enable the Company to focus on resource growth, new gold discoveries and building a sustainable gold production profile without the distraction or cost associated with the management and development of JV project areas."

"We will continue to work with our JV partners on creating value in the coming years and participating in the successful commercial development as these projects advance."

As announced to the ASX on 19 September 2017, Intermin completed a formal Joint Venture agreement with AXF over the Richmond project. AXF brings considerable technical expertise to the project and has extensive business relationships throughout Southeast Asia.

Details of the agreement between the parties include:

- AXF to solely contribute to further expenditure of A$5m on the projects to earn a further 50% over a three year period, inclusive of the completion of a Feasibility Study on part or all of the project area

- Upon AXF satisfying the earn-in terms, each party will contribute to ongoing expenditure in accordance with its respective percentages

AXF has now formally committed to the stage 2 expenditure commitment of A$5m over three years to March 2021 inclusive of a Feasibility Study on commercial production. Metallurgical testwork is underway at two leading Chinese research institutes to assess optimal pre-concentration steps and downstream processing options. Initial results on pre-concentration of the ore are expected in the current June Quarter. Infill drilling of the high grade Lilyvale prospect is planned for the September Quarter 2018 with the aim of upgrading the Resource to the Measured and Indicated Categories. Initial discussions will also commence with potential offtake partners and local, state and national stakeholders.

In April 2015, Intermin and its 100% owned subsidiary Black Mountain Gold Limited ("BMG") entered into a farm-in and JV agreement with La Mancha Australia Pty Ltd which was subsequently acquired by Evolution Mining Limited (

ASX:EVN) ("Evolution") (refer Evolution ASX announcement dated 20 April 2015). Under the terms of the agreement, Evolution had the right to earn up to 70% of the Binduli Gold Project near Kalgoorlie in Western Australia by spending $4.6m over five years.

Evolution has completed a 3,597m aircore program to the south of the Teal project area and a 4,006m reverse circulation program in the Coot, Crake and Honey Eater prospect areas. The results from the December program have not yet been announced by Evolution, however they were only recently presented to Intermin in late March. Some minor mineralisation was discovered with several drill holes recording low tenor, but anomalous mineralisation.

On 14 March 2018, Evolution provided notice of its intention to withdraw from the joint venture. As such, the project area now reverts back to Intermin on a 100% basis. Intermin will now review all the latest information and commence drilling in the current June Quarter 2018 with an initial 5,000m program planned at Coot, Crake, Darter and Honey Eater (see Figure 4 in link below).

ASX:EGS) ("EGS") to form a JV covering Intermin's projects in the Menzies and Goongarrie region (see Figure 5 in link below) which was formalised in June 2017.

Details of the Agreement between the parties include:

- EGS to solely contribute to further expenditure of $1.5m on the projects inclusive of a Bankable Feasibility Study to support a mill installation in the Mt Ida / Menzies region to earn a further 15%

- During the sole funding period, EGS will manage the exploration program and tenure with direction from the JV committee comprising representatives from both parties

- Upon EGS satisfying the earn in terms, each party will contribute to ongoing expenditure in accordance with their respective percentages

Exploration drilling has now commenced in the Menzies region with EGS mobilising a multi-purpose rig for diamond tail drilling at the Lady Irene prospect and the historic Yunndaga mine. Drilling results from both programs are expected in the September Quarter 2018.

In December 2013, Intermin entered into a farm-in and joint venture agreement with Mithril Resources (

ASX:MTH) covering the Intermin's projects in the Murchison mineral field south east of Meekatharra (see Figure 6 in link below).

A number of revisions to the Agreement have been approved by both parties and include:

- During the sole funding period, Mithril will manage the exploration program and tenure

- Upon Mithril satisfying the earn in terms, each party will contribute to ongoing expenditure in accordance with their respective percentages

Given the prospectivity for multiple commodities in the region, Mithril is now focussed on further exploration work at the Nanadie Well Copper Deposit and the adjacent Stark Copper Nickel Prospect. Mithril is currently reviewing both localities with a view to potentially carrying out further drilling in June or September 2018 Quarters.

ASX:SAR) ("Saracen"). The project is located approximately 45km south of Leinster in Western Australia and the tenements currently consist of 14 Mining Leases and two Prospecting Licences (see Figure 1 in link below).

Intermin retains a 10% interest and is free carried to a decision to mine.

Saracen has recently completed a small pre-feasibility drill program on the Lehmans Gold JV and is planning further exploration drilling in the project area in the June and September Quarters 2018.

Intermin owns a $0.50/t mining royalty that relates to ore mined and treated from Mining Lease M26/446 located approximately 10km west of Kalgoorlie-Boulder in Western Australia (see Figure 1 in link below). The Company entered into a Deed for the sale of M26/446 in 2001 and it is now owned by Norton Gold Fields Ltd ("NGF") which was delisted from the ASX on 1 July 2015.

As part of the sale, Intermin was prepaid $1,380,000 of the royalty as part of the acquisition cost, equivalent to a mining and treatment tonnage of 2.76Mt. Mining has been conducted on a semi-continuous basis at the Janet Ivy deposit which is the largest of known deposits on M26/466 since 2009.

Mill factored reconciliation at the end of December 2017 was 2,904,394t treated at the Paddington mill of which 144,394t was subject to mining royalty payments of A$72,000 which have been received.

Ore treated from the tenement at the Paddington mill in the March Quarter was 425,000t and is subject to royalty payments of $212,500. Intermin anticipates further royalty payments on a quarterly basis for material scheduled by NGF to be treated.

To view details on published JORC Compliant Resource and Reserve Estimates including a Competent Persons Statement for Table 1 (see link below), refer to NGF's Resource and Reserve Update December 2014 (NGF- ASX announcement dated 3 February 2015). The most recent JORC Compliant Mineral Resource Estimate for the Janet Ivy Deposit was released to the ASX by Norton while the entity was listed on 3 February 2015 (see Table 1 in link below).

6 As announced to the ASX on 30 January 2018, see also Forward Looking Statements on Page 9 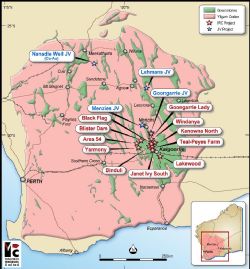 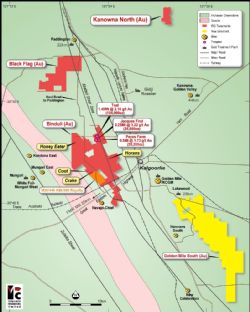 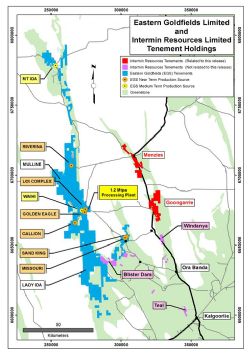 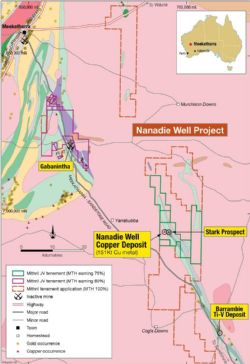 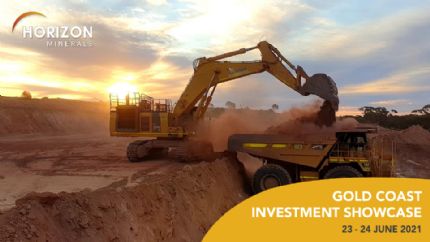