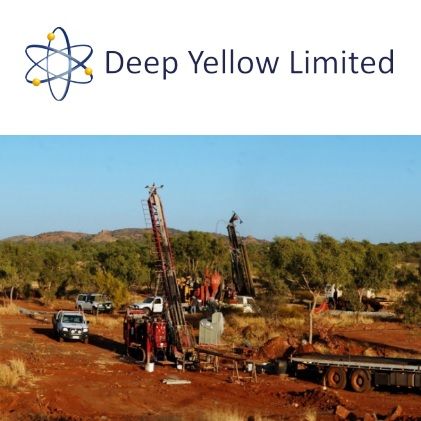 OTCMKTS:DYLLF) is pleased to report encouraging drilling results on EPL3497 where new continuous mineralisation has been identified in the Tumas 1 East palaeochannel area along Tributary 5. Drilling also delineated continuous uranium mineralisation on EPL3496 in the Tumas Central area to the west of Tumas 3. This EPLs are held by Reptile Uranium Namibia (Pty) Ltd (RUN), part of the group of companies wholly owned by Deep Yellow.

(All tables and figures can be viewed in the link below)

As previously announced, the last phase of drilling for the 2018/19 program commenced in February with semi-regional exploration drilling in the Tumas Central area where 47 RC holes were drilled for 1,313m. A combination of exploration and resource drilling followed in the Tumas 1 East area with 211 RC holes for 1,951m completed by 15 April 2019. At Tumas 1 East all tributaries, with the exception of Tributary 8, have had some exploration drilling carried out with resources established in Tributaries 1, 2 and 4. The current program identified continuous uranium mineralisation in Tributary 5 which is now closed off. Figures 1 and 2 show the prospective paleochannel system outline and prospect locations.

Exploration and resource drilling started 4 March 2019 at Tributary 4, 5 and 6 north of the newly defined Inferred Resource at Tumas 1 East as announced 27 March 2019. This completed the drilling planned for the 2018/19 program and in this final phase a total of 211 RC drill holes for 1,951m was completed. Drill spacings varied from 50m to 100m along lines 200m to 800m apart. 76 of these holes returned positive results of greater than 100ppm eU3O8 over 1m. The average thickness of the mineralisation is close to 5m. The average grade of all the 1m intersections >100ppm eU3O8 ppm was 228ppm and >200ppm eU3O8 was 356ppm U3O8.

The Tributary 5 mineralisation thins out towards the west, is closed off to the east but the southern edge of the channel needs further infill drilling before an inferred resource estimate can be undertaken.

Drill hole locations from this program are shown in Figure 2. Figures 3 and 4 show a drill cross-section and long-section respectively highlighting the continuity and thickness of the mineralisation in Tributary 5.

Exploration drilling along Tributaries 4 and 6 encountered thin and low-grade mineralisation.

Tributary 8 which is 7km long remains to be explored.

Equivalent uranium oxide (eU3O8) values as reported here have been determined by Deep Yellow personnel and these will be validated by a competent geophysicist for resource estimation purposes. The equivalent uranium values are based on down-hole radiometric gamma logging carried out by a fully calibrated Aus-Log gamma logging system.

Mineralised intersections that are above the 100ppm eU3O8 over 1m cut-off are tabulated in Table 1, Appendix 1. All drill hole locations are listed in Table 3, Appendix 1.

Semi-regional exploration drilling at Tumas Central was completed in February 2019. As announced on 20 December drilling started here late in 2018 but work had to be suspended due to the Christmas break. On resumption a further 47 holes for 1,313m were completed in this area in 2019. Drill hole spacing was variable ranging from 100m to 200m spaced holes along profiles 200m to 800m apart. The area is one of the seven semi-regional exploration targets which were identified early in 2018 but this priority zone could not be tested previously due to access problems which are now resolved. Targets in the area included testing the confluence of two channels and some surface radiometric anomalism over the main palaeochannel.

Figure 5 shows the exploration drill hole locations in relation to the historic drilling at Tumas 3 West and Tubas Red Sand areas. Figure 6 shows a north-south cross-section through the area highlighting the location of the mineralisation at the southern edge of the large Tumas Channel.

Mineralised intersections from the Tumas Central drilling above >100ppm eU3O8 over 1m cut-off are tabulated in Table 2, Appendix 1. All drill hole locations are listed in Table 3, Appendix 1.

The results of the ongoing exploration continue defining additional uranium mineralisation, much of it continuous, maintaining the highly encouraging prospectivity of these palaeochannels associated with the eastern extension of Tumas 1 and promising uranium mineralisation in Tumas Central.

The 2018/19 drill program is now completed and it succeeded in substantially extending the previous limits of mineralisation at Tumas 1. Drilling is demonstrating the potential to further extend the mineralisation in this zone and along other parts of the channel system. Testing for mineralisation in tributary channels, which historically were neglected, has shown to be just as important as drilling the main channel targets for upgrade of the overall resource base associated with these highly fertile palaeochannels. The uranium mineralisation is not confined to one simple, single channel but rather is associated with a complex palaeodrainage system containing several channels and tributaries.

Appendix 1, Tables 1 and 2 list the 76 exploration drill holes at Tumas 1 East and 21 semi-regional exploration drill holes from the Tumas Central area respectively returning uranium intersections above cut-off and showing equivalent uranium values in ppm and thickness with hole depth and coordinates provided. Table 3 in Appendix 1 lists all 258 drill holes completed from December 2018 to April 2019 from the current drilling program which are the subject of this release.

This fourth, now completed, drilling campaign has again produced successful results. It has confirmed that the previously discovered deposits can be expanded. This has not only added to the current uranium resource base of this project but, just as significantly, continues to emphasise the strong exploration potential of the extensive, uranium-fertile palaeochannel system within which the new Tumas palaeochannel discoveries occur.

There are now 5 distinct mineralised zones (Tumas 1 & 2, Tumas 3, Tubas Sand/calcrete deposits and Tumas 1 East) identified within the 125km of palaeochannels that occur within the Reptile Project tenements (see Figure1). Approximately 50% of these have now sufficiently been explored over the past 2 years and the resource base in the Tumas channel system has been increased by 160%. Some 50%, or approximately 60km, of this palaeochannel system which deepens to the west remains to be properly tested.

These positive results, both from the current 2018/19 and 2017 drilling and re-interpretation of historic exploration data which outlined the regional palaeochannel target, confirm management's confidence that the existing uranium resource base for Langer Heinrich style deposit/s within the Reptile Project area can be further increased.

It is planned that drilling will start again in the second half of 2019 with the drilling program including infill resource drilling required for resource estimations at Tumas 1 East, Tumas Central and Tubas Red Sand/calcrete areas.

John Borshoff commented: "This latest drilling which marks the end of the 2018/19 drilling season has finished on yet another positive note delineating a cumulative 4.5km of continuous uranium mineralisation. Drilling of Tributary 5 and Tumas Central has again demonstrated the high-quality nature of the exploration target the Company has uncovered. The Tumas palaeochannel is proving remarkably fertile showing all the hallmarks that enhancement of the Deep Yellow uranium resource will continue to occur." 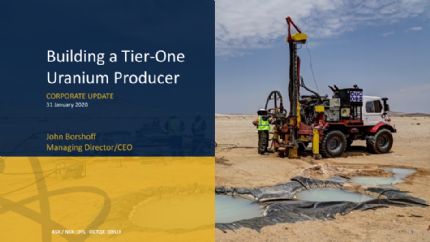