STGSF:OTCMKTS) advises that it has completed the drilling of the Rougemont-3 dual lateral well, with the rig released on Saturday.

The second lateral in the well has been successfully drilled to intersect the Rougemont-2 vertical well. It has now been lined to facilitate production.

The lateral achieved 97% within the target coal seam, resulting in 1130m exposure to the reservoir. Together the two laterals provide direct access to ~ 2400m of coals.

Gas shows (99% methane) in drilling fluid during drilling of the second lateral averaged a very promising 15 - 19%, indicating the coals are gas saturated. The average over both laterals was ~20%, boding well for gas production once testing starts.

Testing of the combined Rougemont-2 and -3 well pair will commence once Rougemont-2 has been recompleted and a new pump installed. This is expected in the next few weeks, subject to weather conditions.

Testing will commence with the water level in the wells being drawn down slowly to optimise production. Initial gas flows are expected to commence within the next 2-3 months.

The Rougemont-3 horizontal well is being drilled to confirm the gas production potential of the Rougemont area within State Gas' 100%-owned Rolleston-West Project (ATP 2062) and to provide gas for a future pipeline to connect the project area with the east coast gas pipeline network.

The well targets the coals of the Bandanna Formation, in commercial production at the Arcadia Valley to the south-east. 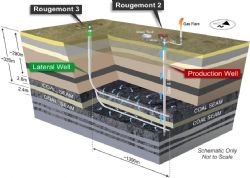