Social Media Share this Article
Tweet
Sydney, Sep 5, 2008 AEST (ABN Newswire) - Yesterday, the Australian share market closed weaker across the board as the big miners and most of the banks fell. On Thursday the benchmark S&P/ASX200 index slid below the key 5000 mark, losing 80.5 points, or 1.59%, to 4979.5, while the broader All Ordinaries lost 79.6 points, or 1.55%, to 5050.9. Analysts says today investors face a day of turmoil as Wall St slumped overnight on renewed concerns about the economy with reports showing retail sales and employment are weakening.

At 6.52am on the Sydney Futures Exchange, the September share price index futures contract had fallen 152 points to 4849.

The Aussie dollar plunged 2.3% to 81.03 US cents this morning, less than two months after it neared parity with the greenback. At 0700 AEST, the Australian dollar was trading at $US0.8226/30, down from yesterday's close of 0.8353/57. It was the Australian dollar's lowest opening since September 6 last year.

Oil prices fell as the US dollar strengthened against the euro. New York's main contract, light sweet crude for delivery in October, slid 1.46 dollars to close at 107.89 dollars a barrel.

The Seek employment index, which measures the ratio of online job advertisements to applications, rose by 0.2 per cent in August to 77.1 index points, seasonally adjusted. It was the index's first monthly rise since November 2007, after it slumped in July to the lowest reading since the series began in July 2004.

The Australian Industry Group-Housing Industry Association Performance of Construction Index (Australian PCI) remained below the 50 level that separates expansion from contraction. It showed that activity in the building industry fell for the sixth straight month in August as high interest rates and poor investor and consumer confidence hit the sector. The index rose by 1.5 index points to 43.1.

After the Reserve Bank's decision to lower the cash rate by 25basis points to 7 per cent. The top four banks said yesterday that credit card rates, which are as high as 20 per cent, would remain "under review". The big banks are earning nearly $225,000 a day by refusing to deliver the Reserve Bank's interest rate cut to thousands of credit card customers.

India's biggest private electricity generator, Tata Power Co. Ltd(BOM:500400), on Thursday said it had agreed to acquire a 10% stake in Geodynamics Ltd(ASX:GDY), an Australian firm seeking to tap geothermal energy. Tata Power will spend Rs165 crore to buy the stake, a company statement said. The Australian firm owns a licence for exploring 2,000 sq.km in the Cooper Basin, touted to contain the hottest granites on earth, and are estimated to provide a thermal resource equivalent of 50 billion barrels of oil.

The Crazy John's will be sold to Vodafone (LSE:VOD) less than a year after the death of its founder, John Ilhan, who died last October aged 42. Yesterday, Mr Ilhan's widow, Patricia, said she would sell her 75 per cent stake in the company. The National Australia Bank and key members of the Smorgon family own 25 per cent of the business. It is understood NAB (ASX:NAB) will exit its 8.3 per cent stake, while the Smorgon family will retain a 16.7 per cent shareholding.

Printing and marketing group PMP (ASX:PMP) is expanding into book distribution after yesterday paying A$21 million for one of Australia's largest movers of niche books, Scribo Group. Scribo, which is privately owned, was formed in February by the merger of Tower, Gary Allen, Brumby and Bookwise. 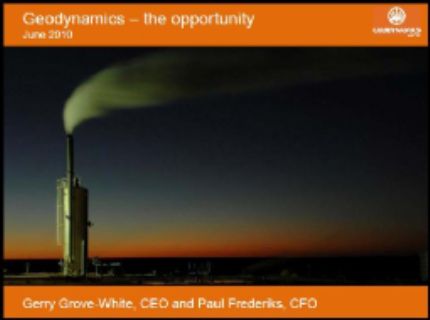