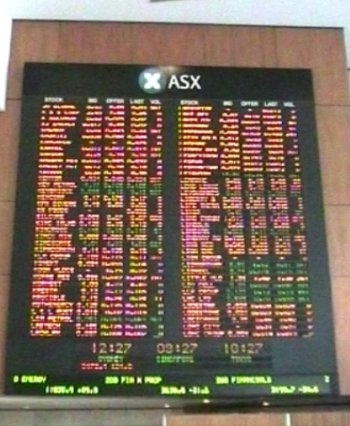 Resilient to Bad Leads
Sydney, Feb 25, 2009 AEST (ABN Newswire) - Overnight the US key indexes rallied as the stocks were oversold in the previous trading session and investors were waiting for a catalyst from US President Barack Obama's speech.

Yesterday the Australian shares were showing their resilience to the bad leads from overseas. The market ended with a modest drop after a rebound from the early losses. The benchmark S&P/ASX 200 ended down 0.6%, or 19.6 points, at 3331.6, while the broader All Ordinaries index also fell 0.6%, or 19.1 points, to 3285.

Fortescue Metals (ASX:FMG) last night signed a deal to allow one of its key customers, China's Hunan Valin Iron & Steel, to grab a 16.5 per cent stake in Fortescue. Valin will have additional offtake and a seat on the Fortescue board, but no rights to marketing or representation on management committees.

Commonwealth Bank (ASX:CBA) has agreed to acquire a A$2.25 billion portion of Wizard Home Loans' portfolio from GE Money.

Flight Centre (ASX:FLT) has reported a 57.4% fall in profit to A$26.1 million for the December half year, compared to A$61.2 million in the previous corresponding period. The company also cut its interim dividend to nine cents, from 37.5 cents.

Rail and ports operator Asciano Group (ASX:AIO) said its net profit attributable to shareholders was A$106.9 million for the July to December period, up from A$98.8 million in the year earlier period.

APN News & Media (ASX:APN) has made a net loss in 2008 of A$24 million before one-off items which included a large writedown on its New Zealand assets. Net profit before significant items was A$140.1 million.

Macquarie Airports (ASX:MAP) has reported an 87 per cent increase in profit for fiscal 2008 to A$2.07 billion, up from A$1.1 billion in fiscal 2007. But it forecasts a challenging year ahead, particularly in Europe.

Babcock & Brown Wind Partners Group (ASX:BBW) has posted a net loss of A$88.4 million in the half year to December 31, 2008, compared with a previous A$4.4 million profit.

Multiplex Prime Property Fund (ASX:MAFCA) has posted an interim net loss of A$38 million. The fund says it's considering selling its interest in a number of Sydney and Melbourne office blocks to reduce debt load.

Goodman Group (ASX:GMG) posted a net loss of A$465.9 million in the six months ended December 31, compared with a net profit of A$284.9 million for the first half of last year.

WorleyParsons Ltd (ASX:WOR) has booked a 30 per cent rise in first half profit to A$197.5 million, up from A$152.7 million in the prior corresponding period. The company says it expects to report "good growth" for the full year.

Pacific Brands Ltd (ASX:PBG) has delivered a net loss for the half year ended December 31 to A$149.956 million, compared to a profit of A$57.02 million in the previous corresponding period. It will axe 1,850 jobs from its manufacturing and administration operations.

NIB Holdings Ltd (ASX:NHF) announced a net profit of A$2.07 million in the half year ended December 31, compared with a net loss of A$7.63 million for the same period of last year.

Macarthur Coal Ltd (ASX:MCC) said its net profit in the six months ended December 31 was A$106.94 million, a 692 per cent increase from A$13.5 million for the first half last year.

Seven Network (ASX:SEV) reported an 84.1 per cent fall in first half profit, after writing down the value of its investments due to declines in financial and advertising markets.

AGL Energy (ASX:AGK) has posted a rise in net profit for the six months to December 31. It was A$1.65 billion, compared to an A$22.9 million loss in the previous corresponding period. The energy retailer also says it is on track to meet its full-year guidance.