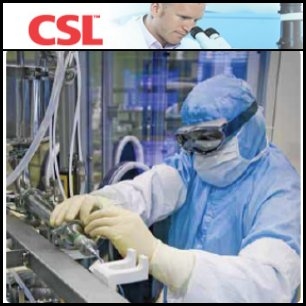 CSL Limited (ASX:CSL) says the growing success of its business overseas could affect its annual profit, and it would not frank its interim dividend as a result. But with 80 per cent of the group's sales now deriving from offshore, the current exchange rate could hurt its profit.
Sydney, Oct 14, 2009 AEST (ABN Newswire) - US stocks closed mixed overnight as investors took profit ahead of the wave of corporate earnings offset the news of an acquisition in technology sector. Dow index ended slightly lower while the tech-heavy Nasdaq composite was up on Cisco's deal to purchase Starent Networks.

National Australia Bank survey showed that business confidence in Australia fell four points to +14 points in September, significantly reversing the 8 points surge in August. The fall in confidence was heavily concentrated in manufacturing, wholesale and retail sectors, while the only sector to strengthen was construction which it said was probably related to the federal government's A$20 billion infrastructure program.

On Wednesday, the Westpac-Melbourne Institute survey of consumer sentiment for October is also released. The index soared 1.7 per cent in October, to 121.4 points, the highest since June 2007. The rise in consumer confidence has been helped by the low interest rates and a surprise fall in the jobless rate.

Rio Tinto (ASX:RIO) has doubled its stake in Canada's Ivanhoe Mines (TSE:IVN) to 19.7 per cent. The company completed the purchase of about 46.3 million Ivanhoe shares at $US8.38 each. The move comes a week after Mongolia's government signed an investment agreement for Ivanhoe's $US4 billion Oyu Tolgoi copper-gold mine. Under the arrangement with Ivanhoe, Rio Tinto can raise its Ivanhoe stake to almost 47 per cent.

Electronics retailer Clive Peeters (ASX:CPR) says it cannot explain a rise in its share price since last Friday. The company also said it is too early to give any earnings guidance for the first half of 2009-10. The company said it was unable to quantify its operating profit before abnormal items for the half-year to December 31 or say if it would vary from the previous corresponding period by more than 15 per cent.

Media investment company Macquarie Media Group (ASX:MMG) yesterday said that American Consolidated Media (ACM), its regional newspaper business in the United States (US), may not comply with a key leverage covenant on its US$133.7 million business level bank facility. Macquarie Media has no plans to provide any parent level cash injections or other financial support or guarantee to ACM or its lenders.

The board of Fairfax Media (ASX:FXJ) has named Roger Corbett its new chairman. Mr Corbett will replace Ron Walker, who is retiring on October 30.

The Australian Securities and Investment Commission has fined Commonwealth Bank (ASX:CBA) A$100,000 over its alleged failure to meet continuous disclosure obligations in the Corporations Act stemming from the bank's capital raising in December 2008. CBA said the payment was not an admission of liability and cannot be regarded as a finding that the bank contravened the Corporations Act.

CSL Limited (ASX:CSL) says the growing success of its business overseas could affect its annual profit, and it would not frank its interim dividend as a result. But with 80 per cent of the group's sales now deriving from offshore, the current exchange rate could hurt its profit.