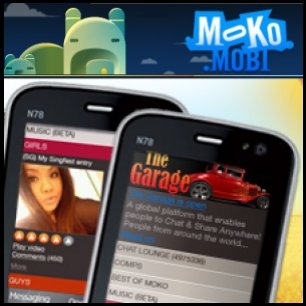 MOKO.mobi (ASX:MKB) has signed an agreement with Telefonica SA (NYSE:TEF), one of Europe's and Latin America's largest mobile networks. MOKO.mobi will be launched with subscription and other premium activity billing, and will be featured on the carrier's mobile content portal.
Sydney, Dec 3, 2009 AEST (ABN Newswire) - Wall Street declined modestly overnight as bearish analyst comments hurt bank shares. Analysts with UBS predicted the capital market's seasonal slowing could come earlier this year, cutting its fourth-quarter earnings target for Morgan Stanley, JP Morgan and others.

Australian shares edged higher this morning with a flat lead from Wall Street. The local market closed at a five-week high on Wednesday led by miners of the precious metal, as gold struck a record price above US$1217. The benchmark S&P/ASX 200 index closed up 43.4 points, or 0.92 per cent, at 4762.4, while the broader All Ordinaries index gained 43.6 points to 4776.70.

The Australian Industry Group/Commonwealth Bank Performance of Services Index (PSI) fell by 2.3 points to 52.5 in November, but it still remained above the 50 level that marks the threshold between growth and contraction. The index of employment rose 1.9 points to 50.5. Australian Industry Group Chief Executive Heather Ridout said the services sector was in the "early stages of recovery".

The competition regulator ACCC has blocked Caltex Australia's (ASX:CTX) proposed A$300 million acquisition of ExxonMobil's (NYSE:XOM) Australian petrol stations. ACCC said the acquisition was likely to substantially lessen competition across a range of fuel markets. ExxonMobil may be forced find a new buyer for its 300 petrol stations. But industry insiders said ExxonMobil would probably need to approach the original underbidders and possibly would receive a lower price.

Metal Storm (ASX:MST) said it has again given the first tranche of Assure Fast Holdings' US$35 million funding due late Wednesday another 24 hours. The company has reduced its day to day expenditure to remain solvent for as long as possible to allow as much time as possible for this funding to be received. Metal Storm said the board is testing the issue of solvency each day and will need to appoint an administrator as soon as that test cannot be satisfied.

Seven Network (ASX:SEV) as lost an appeal in a case against a raft of media, telco and sporting parties related to the 2002 demise of the broadcaster's pay-TV sports channel, C7. C7 collapsed in 2002 after failing to win the broadcast rights to the AFL and NRL and failing to gain access to the platform of pay-TV counterpart Foxtel and because Optus stopped buying its content. The appeal case had lasted more than a year.

Gindalbie Metals (ASX:GBG) has awarded a A$70 million contract for construction of the main camp and accommodation village for the Karara iron ore project to Western Australian company Doric Constructions (Australia). The contract encompasses design and installation of the construction camp and associated facilities that will house the main construction work force for Karara, where on-site clearing and earthworks are already well underway.

MOKO.mobi (ASX:MKB) has signed an agreement with Telefonica SA (NYSE:TEF), one of Europe's and Latin America's largest mobile networks. MOKO.mobi will be launched with subscription and other premium activity billing, and will be featured on the carrier's mobile content portal.