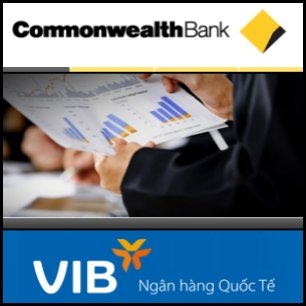 The International Monetary Fund (IMF) said in its latest World Economic Outlook that it expects Australian growth to reach 3.0 per cent in 2010, up from a forecast of 2.5 per cent in January. The IMF says growth in Australia will be helped by strong demand for commodities, particularly from China. Unemployment in Australia is expected an average 5.3 per cent this year and 5.1 per cent next year. IMF also anticipates that consumer price inflation to be 2.4 per cent in both 2010 and 2011.

Today the Australian Bureau of Statistics is due to release new motor vehicle sales for March.

The Commomwealth Bank of Australia (

ASX:CBA) has entered agreements with the Hanoi-based Vietnam International Bank (VIB) to form a strategic partnership. The Australian bank will take a 20 per cent stake in VIB and hold two seats in the board of VIB. The deal is subject to regulatory approval. Upon the completion of the transaction, VIB expect it to be a top five private joint stock commercial bank in Vietnam.

ASX:WES) said today its supermarket and convenience store chain Coles achieved a 4.9 per cent sales increase in the third quarter of the 2010 financial year, compared with same period in 2009. Wesfarmers' home improvement and office supplies divisions both recorded strong sales growth in the period. The company said its retail divisions sales performance in the third quarter was pleasing overall given the back drop of rising interest rates and the positive impact of the federal government fiscal stimulus packages on retail sales in the prior corresponding period. But the company remains cautious on the outlook for the next quarter.

ASX:CTX) first quarter earnings were up 33 per cent from a year earlier after strong petroleum refiner margins. Unaudited profit after tax on a replacement cost of sales operating basis for the three months to March 31 was A$130 million, up from A$98m a year earlier, largely due to the strong Singapore weighted average margin for the quarter. The company remained cautious to the short term outlook, but said the longer term outlook is positive.

NYSE:AU) said on Wednesday that it has secured a US$1 billion, four-year unsecured revolving credit facility (RCF) for a syndicate of 16 banks. The RCF replaces a three-year facility of US$1.5 billion that matures in December 2010. AngloGold said this not only removes refinancing risk for the company well ahead of the scheduled maturity date, but also advances its financial strategy of increasing the term of debt in line with its long life assets.