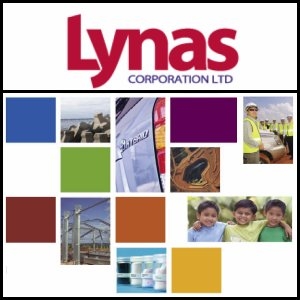 ASX:LYC) (OTCQX:LYSDY) signed a new supply agreement with a major Japanese Rare Earths consumer for the supply of Mount Weld Rare Earths to be produced at the Lynas Advanced Materials Plant (LAMP) in Kuantan, Malaysia. The contract will be for product supplied from the 11,000 tonnes of Rare Earth Oxide per annum in Phase 1 production at the LAMP, which is on schedule for the third quarter of 2011. The contract price is the China FOB market price for the product at the time of delivery, plus delivery costs from FOB Kuantan to Japan. The contract has an evergreen clause, allowing the contract to extend upon mutual agreement. Lynas's Mount Weld deposit in Western Australia is the richest Rare Earths deposit known in the world. The company continues to be actively engaged with potential customers in Europe, Japan and the USA.

ASX:OYM) (OTCBB:OLYMF) has reached an agreement to increase the control of the Bau Gold Project in Malaysia to 93.55%. The project has been independently assessed as having JORC gold resources of: 0.56M oz measured + indicated and 1.89M oz inferred. This resource includes several different mineralization styles, in multiple deposits that have to date been drilled only to shallow depth and remain open to further expansion through continuing exploration. An additional drilling program will be conducted to upgrade the bulk of the existing resource to Measured and Indicated categories and to test deeper and lateral resource extensions.

ASX:AFR) will commence a Resource Definition Drilling in mid-October at the Sese Coal Project in Botswana. The programme will comprise approximately 100 diamond drill holes drilled at 1 km spacing to collect HQ diameter core to be used in further quality test work. Core samples will be sent to South Africa for proximate analysis and washing test work. All work, including resource estimation, is expected to be completed during the first quarter of 2011.

ASX:SLV) has entered into an Share Exchange Agreement to increase its interest in Sylvania Metals Limited, which operates the Sylvania Dump Operations ("SDO"). Upon the completion of the Agreement, Sylvania Resources Limited will have 100% ownership of SDO. The SDO operates five platinum plants in South Africa, which have all been constructed and are in various stages of operation.