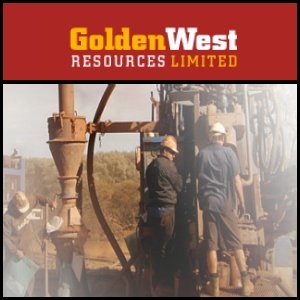 ASX:GWR), and its subsidiary, Aureus Gold Limited have entered into a heads of agreement with Silvrex Limited, a private UK Company, to seek to implement a merger of Aureus and Silvrex. Silvrex's principal asset is the right to acquire a majority interest in a 636 sq km tenement in the highly gold-prospective West African country of Senegal. The tenement is within the West African Birimian greenstone belt that already contains several multi-million ounce gold resources. The acquisition will form part of the Aureus IPO that GWR is seeking to complete by April 2011.

ASX:NST) has again increased the known depth of the Voyager 1 lode at the Paulsens gold mine in WA, opening the door to further significant increases in production and mine life. Significant results include 2.0m at 77.1 g/t gold and 1.2m at 73.1 g/t gold. Latest results show the Voyager 1 lode currently being mined continues, and remains open, at depth.

ASX:CUL) is pleased to advise that Fortescue Metals Group Limited (

ASX:FMG), as Manager of the Wyloo Iron Ore Joint Venture, has reported a number of significant RC drilling results from the Wyloo South and Wyloo North, Bedded Iron Ore Prospects located in the West Pilbara. Results received include: 36m at 62.2% Fe from 48m, 33m at 61.6% Fe from 21m and 32m at 61.2% Fe from 1m. Fortescue has previously indicated it expected that the Wyloo South drilling will have outlined an Exploration Target of at least 30Mt of mineralisation.