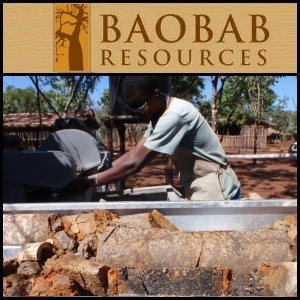 LON:BAO) ('Baobab' or the 'Company') is an iron ore, base and precious metals explorer with a portfolio of mineral projects in Mozambique. The Company announced on 15 November 2010 the signing of a Joint Venture with North River Resources plc (

LON:NRRP) ('North River') in relation to North River's Monte Muande magnetite/phosphorus, base and precious metal project (the 'Project') in the Tete province of Mozambique. Baobab has the right to earn up to 90% equity in the project. The Company is pleased to present an update on work completed.

- Compilation of trench and drill hole data from the Geological Institute of Belgrade (GIB) 1983-1985 exploration campaign at the Monte Muande magnetite/phosphorus deposit is nearing completion. Significant Head Grade intercepts include:

- Soil geochemistry completed by Omegacorp during 2006-2007 delineates an anomalous corridor of iron (>15% Fe) and phosphorus (>1% P) extending from the GIB work area 4km to the southwest, overlying a robust magnetic trend.

- Baobab has commissioned Coffey Mining consultants to review the GIB and Omegacorp data and generate a magnetite/phosphorus Exploration Target for the Monte Muande area as well as make preliminary investigations into potential mineral processing flow sheets.

- The south-western corner of exploration licence 1119L is underlain by 12km2 of lithologies of the Lower Karoo, which hosts the coal resources at Vale's (

PINK:RFLMF) Benga and Zambeze projects. Mapping completed By Mavuzi Resources Ltd in 2008 identified evidence of coal exposed in river banks. Baobab has commissioned consultants to make a more detailed assessment of the coal potential as soon as field conditions allow.

- Baobab has scheduled 2,000m of diamond drilling at the Monte Muande deposit to commence during April 2011.

Commenting today, Ben James, Baobab's Managing Director, said: "the data compilation of historical work has paid off handsomely. The North River JV area is shaping up to be a robust, multi-commodity project in what is becoming a major mining and infrastructure hub of southern Africa. The drill hole and trench results highlight the potential grades of the deposit while the soil geochemistry indicates that the magnetite/phosphorus mineralisation extends for a considerable distance to the southwest where it has yet to be drill tested.

"The Company looks forward to reviewing the results from the commissioned studies over the coming months and, in particular, to collaring the first drill hole into the Muande deposit in 25 years.

Contouring of the iron (Fe) and phosphorus (P) soil analyses has delineated a corridor of >15% Fe and >1% P anomalism extending from the GIB work area 4km to the southwest. The geochemistry also outlines a discrete 2,500m x 400m copper (Cu) in soil anomaly immediately west of the southwestern limit of the Fe/P corridor, overlying a parallel magnetic trend. Both sets of anomalies remain undrilled.

The Company expects to complete the compilation of historical work this week at which time it will hand over the data pack to internationally respected consultants Coffey Mining Pty Ltd ('Coffey'). Coffey has been commissioned to review the data and associated reports to estimate a magnetite/phosphorus Exploration Target for the Monte Muande area. Coffey's metallurgical team will also make preliminary investigations into potential mineral processing flow sheets to generate discrete magnetite and phosphate concentrate products.

Baobab has scheduled an initial phase 2,000m of diamond drilling at the Monte Muande deposit to commence in Q2 2011.

North River Resources plc is an AIM listed multi commodity resource development company, focused on southern Africa. Its current portfolio includes significant gold, base metal and uranium assets in Namibia and uranium, gold and copper assets in Mozambique. North River has an active development plan with the aim of generating production in the near term. North River is approximately 45% owned by AIM listed Kalahari Minerals plc (

- Stage 1: Baobab commits to funding a First Work Programme at a cost of not less that US$625,000 over a period of not more than 12 months. The work programme will include 2,000m of diamond drilling. Baobab's participatory interest in the Project upon the completion of Stage 1 will be 60%.

- Stage 3: Upon completion of the Pre-Feasibility Study, Baobab will have the option to increase their participatory interest by an additional 15% (to 90% if North River elects not to participate) by undertaking and funding a Definitive Feasibility Study over a period of not less than 18 months.

The complete Baobab Resources plc announcement including figures and maps, please refer to the following link: