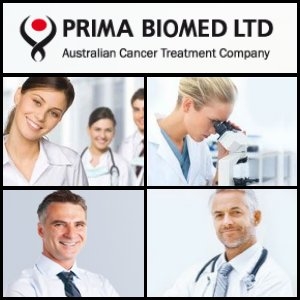 ASX:PRR) today announced that there has been an agreement for strategy and design of the Phrase III clinical trial for the CVac(TM) immunotherapy therapeutic ovarian cancer vaccine. The agreement comes after the European regulator, the European Medicines Agency advised that Scientific Advice for the Phase III trial had successfully been granted. Receiving Scientific Advice is a significant milestone in the timeline progression for CVac(TM)'s global registration. Prima can now move forward and begin preparations for patient enrolment into the trial. If the trial is successful, CVac(TM) will become the world's first ovarian cancer immunotherapy treatment.

ASX:RDS) reported further significant assay results from recent reverse circulation drilling at its 100% owned Tollu copper project in Western Australia. Copper sulphide mineralisation has been extended to over 200m strike length and to a depth of 253m, highlighting the potential to increase the size of the mineralised body. Further drilling is scheduled to commence in May 2011 to extend the current mineralisations and test other Cu-rich areas.

ASX:CAY) has accelerated its exploration programme on its gold projects in Burkina Faso, following the discovery of several new prospects on its recently acquired permits. Since late November 2010, the Company has drilled 6,616 meters and taken over 1,300 samples with highest grades up to 6.16 g/t Au. The Company is to commence its maiden reverse circulation drill programme in late March or early April 2011.