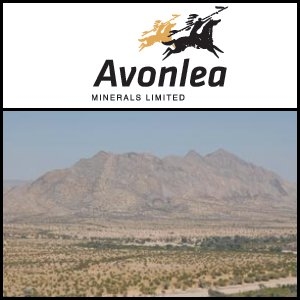 ASX:AVZ) said today that test results have confirmed high grade potential at Thresher, Hammerhead and Bronzy magnetite iron ore prospects in Namibia. Grades of up to 62% were returned from rock chip sampling. The three prospects have a collective magnetite exploration target of 1-1.9 billion tonnes at 20%-30% Fe. The Company will commence a more focused mapping program and a drilling program to further define and extend the target.

ASX:QHL) is participating in a European research project to investigate the use of nanotechnology to improve material properties, increase cost efficiency and reduce weight of advanced composite parts. The research will focus on manufacturing for the transport industry, with particular emphasis on aerospace and train components. Research is being undertaken in conjunction with 16 major international manufacturing and research organisations and is being partially funded by European Commission. The project is expected to complete in the third quarter of calendar 2013.

ASX:AJX) has signed an agreement with International Textile Group (

PINK:ITXN), whereby the two parties will work collaboratively on several product development initiatives and International Textile Group will be Alexium's preferred fabric supplier. This agreement will accelerate the adoption rate of Alexium's Reactive Surface Treatment technology in the textile market. The technology is a protective treatment that can be applied to apparel and other textiles to provide multifunctional properties such as chemical and biological protection, flame retardance, water proofing and oil repellency.

PINK:QRXPY) announced today the completion of its pre-New Drug Application (NDA) meeting with the United States Food and Drug Administration (FDA). At the meeting, the Company reviewed with the FDA a number of critical components of its planned NDA submission, and the Company believes it is on track to file an NDA for MoxDuo(R) IR in mid-2011. MoxDuo(R) IR will target the acute pain market for the management of moderate to severe acute pain in patients who need an opioid analgesic.